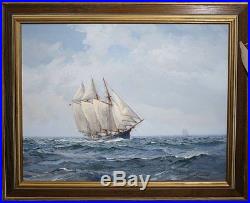 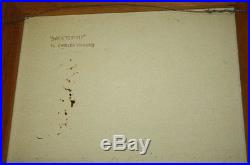 We’ve already had a lot of interest on this piece. From charlesvickery. Com: Highly respected by other artists and revered by thousands of collectors, Charles Vickery awed us with his dramatic paintings and charmed us with his humble demeanor. Although he died in September of 1998 at the age of 85, we can look back with pride at the extraordinary career of an extraordinary man. What Vickery is best known for and will be most remembered for is his ability to paint the infinite moods of waterto make it come to life. But what initially stumps everyone is how this talent and passion for the sea could come from a man who lived so far from it. It turns out that he actually explored many different types of subjects early on. Born in Hinsdale, Illinois in 1913, his talent was obvious at an early age, and he worked hard at developing it. But things took a decidedly different path when, just after high school, he discovered the work of some artists he would later refer to as the old prosaccomplished masters such as Winslow Homer, Montague Dawson, and Frederick Waugh. According to Vickery, they were some of the first artists to break through the tyranny of the brown gravy school of marine art. He became captivated with their work, and he was determined to learn their techniques and study their use of color. He later studied at the Art Institute of Chicago and the American Academy of Fine Art, but he often credited Lake Michigan as being his greatest instructor. The inspiration it provided and the lessons it taught him were far more meaningful to him than the study of tiresome fundamentals. Vickery loved sketching at the Chicago Lakefront, the Indiana Dunes, and at a number of favorite haunts along the Eastern Seaboard. He believed constant observation of the subject is as essential for the experienced artist as it is for the beginner. Going to the source was absolutely critical. Capturing the elusive essence of the sea is not something you can do by looking at photographs. Movement is the thing, said Vickery. The wind can create sudden drama in as much time as it takes to blink your eyes. To him, the challenge was in respecting the constant interplay of naturethe sun, sky, wind and water all working together. With that in mind, he always considered himself a student. There were some very lean years. Vickery once said that the early years found him along the shores of Lake Michigan living in a tent and eating peanut butter sandwiches. Many hours and many years were spent in all kinds of weather studying wave actions and the color of sky and water. But his painstaking effort did not go unnoticed. It was in 1951 that Eleanor Jewitt, a respected art critic for the Chicago Tribune, first discovered his ability. He was greatly encouraged by her reviews which referred to him as one of the great painters of this age. A bright Winslow Homer. Similar praise would follow, and before long, he was regarded as one of the finest seascape artists of our time. But it was never celebrity he was seeking. The two things he found most satisfying were pleasing those who collected his work and encouraging other artists to further develop their talents. Through his involvement with numerous art organizations, including charter memberships in the American Society of Marine Artists and the Oil Painters of America, he hoped to pass the torch that the old pros had given to him so many years earlier. He certainly accomplished these goals, and he has left an indelible mark on the art world. The item “CHARLES VICKERY BEAUTIFUL Original Oil on Canvas Clipper Under Sail” is in sale since Tuesday, November 29, 2016. This item is in the category “Art\Art from Dealers & Resellers\Paintings”. The seller is “antiqueauctionsinc” and is located in Libertyville, Illinois. This item can be shipped to United States, to Canada, to United Kingdom, to China, to Mexico, to Germany, to Japan, to France, to Australia, RU, DK, RO, SK, BG, CZ, FI, HU, LV, LT, MT, EE, GR, PT, CY, SI, SE, KR, ID, ZA, to Belgium, to Hong Kong, to Ireland, to Netherlands, PL, to Spain, to Italy, to Austria, IL, to New Zealand, SG, NO, SA, UA, AE, QA, KW, BH, HR, MY, CO, PA, JM, BB, BD, BM, BN, BO, EC, EG, GF, GG, GI, GP, IS, JE, JO, KH, KY, LI, LK, LU, MC, MO, MQ, MV, NI, OM, PE, PK, PY, RE.