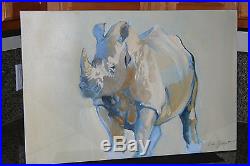 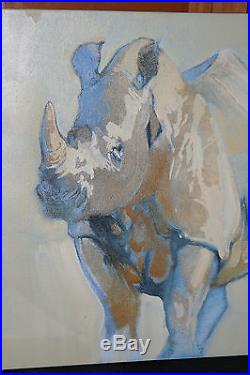 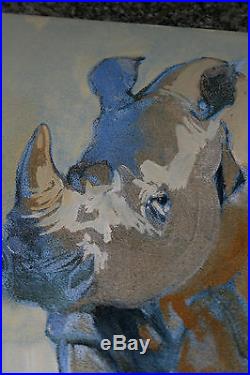 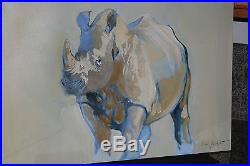 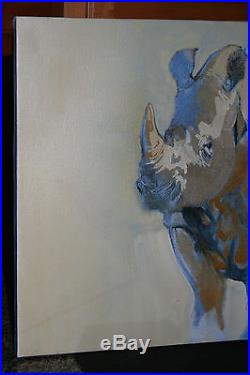 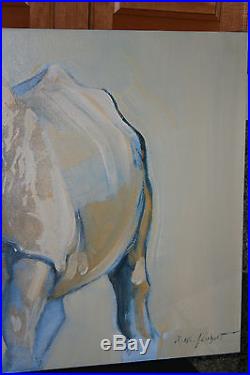 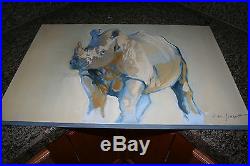 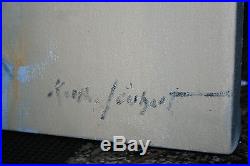 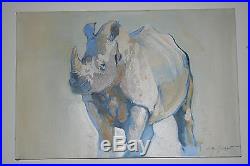 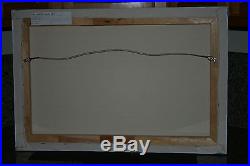 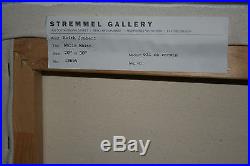 THIS IS AN ORIGINAL 2002 KEITH JOUBERT “WHITE RHINOCEROS” OIL ON CANVAS!!! VERY HARD TO FIND AND HIGHLY COLLECTIBLE!!! THIS PIECE IS GUARANTEED 100% AUTHENTIC AND IS ORIGINALLY FROM STREMMEL GALLERIES IN RENO, NEVADA(PHOTO 10, 11). IT MEASURES 20″ X 30″, COMES UNFRAMED AND SHOWS NO CONDITION ISSUES THAT I SEE: THIS ABSOLUTELY BEAUTIFUL KEITH JOUBERT OIL ON CANVAS WILL MAKE AN EXCELLENT ADDITION TO ANY HOUSEHOLD OR COLLECTION!!! From Wikipedia, the free encyclopedia. Keith Eric Joubert (born 1948 died 31 January 2013) was a South African artist and conservationist, and elder brother of wildlife filmmaker and conservationist Dereck Joubert. Born Joubert’s formative years were spent shuttling between highveld mining communities in the wake of his father, who was a mining surveyor. He attended no fewer than eleven schools, a history that fostered domestic instability but also created a sturdy, resilient character. His family’s regular trips to the Kruger National Park. Sparked an abiding love for the natural world. He studied Industrial Design at the Johannesburg School of Art between 1963 and 1967, thereafter working as book illustrator, political cartoonist, signwriter, and eventually in the advertising industry, developing the graphic style that subsequently informed his work, and turning professional in 1970. Joubert spent a great deal of his time in the bushveld. Finally abandoning city life permanently, and working from a studio in the Selati Game Reserve. Always on the move, Joubert explored Southern Africa. Becoming familiar with Namibia. North to the Ivory Coast. And the Okavango Basin. Where he had a houseboat and studio camp on the Linyanti River. Joubert’s works are to be found in many corporate and private collections worldwide. Believing that possessions complicated his life, he settled for his four-wheel drive vehicle, tent and camp bed. He is survived by his wife, Val. PLEASE ASK QUESTIONS BEFORE PURCHASING. I INSPECT ITEMS WHILE TAKING PICTURES AND IT IS POSSIBLE THAT I MISS A DEFECT. I WILL ALWAYS POINT OUT ANY FLAWS I SEE.. SO PLEASE LOOK AT PHOTOS CLOSELY AS IT IS POSSIBLE YOU SEE SOMETHING THAT I DID NOT. ALL MY PRODUCTS HAVE A 100% SATISFACTION GUARANTEE. PLEASE PAY WITHIN 3 DAYS OF PURCHASING, OTHERWISE UNPAID ITEM CASE WILL AUTOMATICALLY OPEN. IF YOU EVER HAVE ANY PROBLEMS, PLEASE LET ME KNOW SO THAT I CAN FIX IT. MAHALO FOR VISITING KEKOA’S KOLLECTIONS!! Monday, February 11, 2013. Obituary – by Peter Comley Keith Joubert An exceptional man. Africa has lost a great talent. Keith Joubert was unquestionably one of the most gifted artists that this continent has produced. He was born in humble surroundings in Germiston in 1948, grew up in the tough Johannesburg suburb of Mayfair and passed away in the affluent northern part of Johannesburg at the end of January 2013 aged just 64. Those bones of his life belie the compulsion he had to travel to remote places and commune with the wild to gather the mental images he needed to capture Africa its animals, people and atmosphere on canvas like no other before him. He had many imitators but before they could catch up he would simply raise his game. He changed forever the way Africa would be painted. Jouberts works hang in many major corporate and private collections around the world and his clients include royalty from Europe and the Middle East. He has held major exhibitions in many of the art capitals of the world including London, New York, Paris, Texas, Johannesburg and Kasane. But to talk of Keith solely as an artist would be an injustice to my close friend and the godfather to my daughter. Over the twenty odd years that we were friends I came to know a man who embraced life more fully than anyone else I have met. Whether he was working, partying or travelling he did it, uncompromisingly, at full throttle. Half measures and mediocrity he despised as much as he did arrogance. He was at his most combative when it came to seeking solutions to conservation issues when his unique mind would seek answers from outside of the box. Where most followed convention Keith blazed new trails. Success in this world of ours attracts material gain but Keith disdained the accumulation of objects and his sprawling farm home was almost spartanly furnished while his studios in the Botswana bush were tents or simple cabins. The one thing that struck me most about Keith was his ability to treat everyone in the same jovial manner, whether she was a client from the British Royal Family or a petrol attendant at a dusty station he always engaged them in a similar friendly way. He caused many people to smile. He leaves an empty hole in the lives of Val, the woman he loved so transparently and deeply, and his talented brother, Dereck and his wife Bev , as well as his beloved goddaughter – not to mention princesses, friends and petrol attendants from around Africa. Go well my friend and may your soul have mercy on God because you know he cant keep up. The item “ORIGINAL KEITH JOUBERT WHITE RHINOCEROS OIL ON CANVAS FINE ART SOUTH AFRICA” is in sale since Monday, November 30, 2015. This item is in the category “Art\Art from Dealers & Resellers\Paintings”. The seller is “tahoehuskyrescue” and is located in Truckee, California. This item can be shipped to United States.