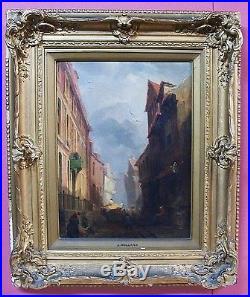 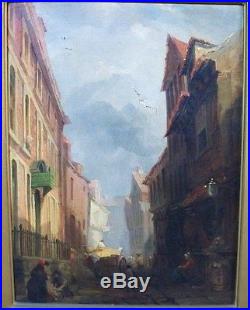 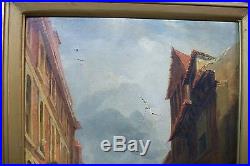 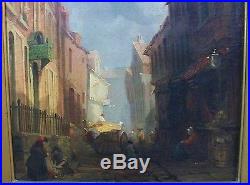 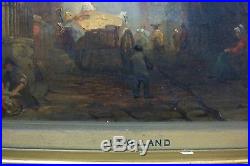 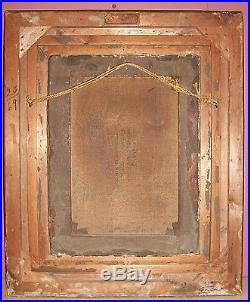 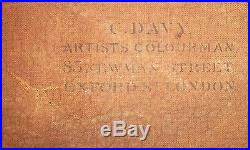 A much sought after English 19th century artist. Even after restoration cost, will still be a good investment and sure to continue appreciating. Minor damage to frame. Frame size: 24″ x 20″. Canvas size: approximately 16.25″ x 12.25″. (18 Oct 1799 12 Dec 1870). Was an English painter of flowers, landscapes, architecture and marine subjects, and book illustrator. He worked in both. And was a member of the. Society of British Artists. Holland was born in Burslem. Where his father and other members of his family were employed at the pottery. Works of William Davenport. James was himself employed there, from the age of 12, for 7 years, painting flowers on pottery and porcelain. In 1819, he came to London. Where he continued to work as a pottery painter, but also gave lessons in drawing landscapes, architecture, and marine subjects. He first exhibited at the Royal Academy. In 1824 and in 1830 visited France. And made studies of its architecture. In 1823 he exhibited a picture of’London from Blackheath’. In l835 he became an associate exhibitor of The Society of Painters in Water-colours. But he left the society in 1843, and joined the Society of British Artists. Of which he remained a member until 1848. He rejoined the Watercolour Society in 1856, and was elected a full member two years later. Holland did a great deal of drawing for the illustrated annuals. Of the day, and for this purpose visited Venice. In 1836, and Portugal. His paintings of Portugal were published in the book, “The Tourist in Portugal”. In 1839 he exhibited a painting of Lisbon. At the Royal Academy. In 1845 he went to Rotterdam. Portugal again in 1847, in 1850 to Normandy. In 1851 again to Geneva, and in 1857 again to Venice. In the course of his life he exhibited, in addition to his contributions to the Watercolour Society, 32 pictures at the Royal Academy, 91 at the British Institution. And 108 at the Society of British Artists. Though generally classed as a water-colour painter, he was equally skilful in oils. He was one of the finest colourists of the English school, and his pictures, especially those of Venice, though neglected in his lifetime, became much sought after in the years after his death. He appears to have ceased to exhibit in 1857. One of Holland’s pupils was topographical artist Frank Dillon. (18231909) known especially for his paintings of Egypt. May be picked up in San Jose, California at no charge. More items added every few days. Usually it is less (much less for small, easy to pack items). The item “John Holland (1799-1870) Original Oil on Canvas Painting. England Street Scene” is in sale since Friday, March 14, 2014. This item is in the category “Art\Paintings”. The seller is “coolerthanmoney” and is located in San Jose, California. This item can be shipped worldwide.