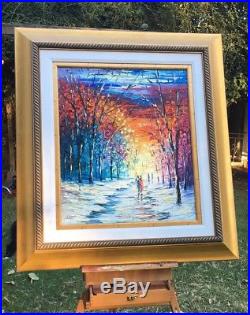 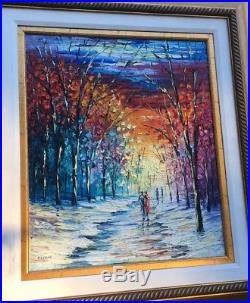 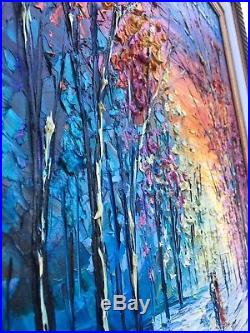 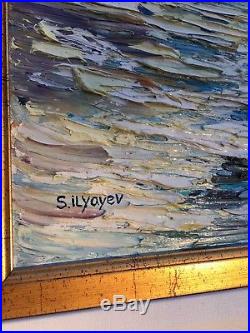 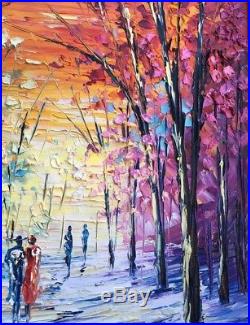 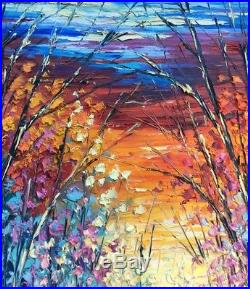 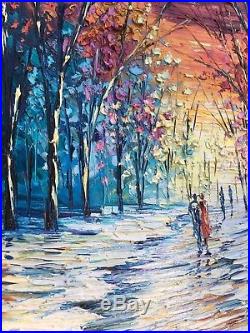 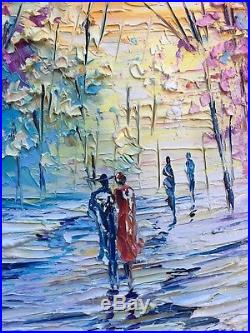 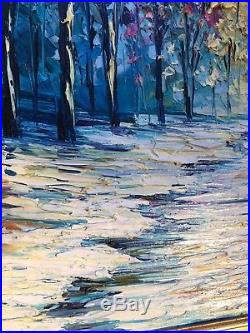 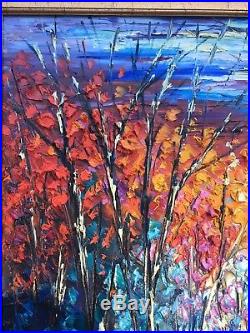 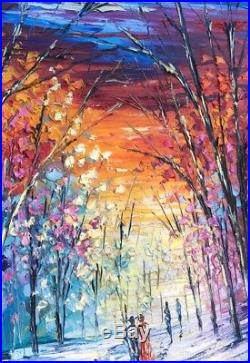 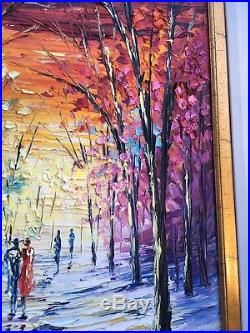 Original Oil Painting on Canvas by internationally renowned Slavs Ilyayev. “A walk to remember” is a 32×36 with a gallery quality frame. His art first introduced to the world at the turn of the century has been internationally acclaim earning him a place in the “art to be collected “, consciousness of dealers and art lovers around the word. Background on the artist. Ilyayev was born on May 11, 1970 in Baku, Azerbaijan formerly part of the U. Ilyayev began studying art in his hometown in 1991. After immigrating to Israel in 1995, he continued his studies at a renowned Israeli art school in Tel Aviv: the Avni Institute of Art & Design. In 1999, Ilyayev participated in his first major exhibitions, first at the Art and Sculpture Union in Tel Aviv and then at the Safrai Fine Art Gallery in Jerusalem. Exhibits soon followed throughout Israel and abroad, as well as shows in the United States. Ilyayevs work is characterized by the elevated texture he creates by applying oil paints with a palette knife. His compositions of light and shadow are affected by the transitions of the seasons. Drawing heavily on autumnal colors and the changing of the leaves, Ilyayev often portrays a theme of rainbow-colored, tree-lined streets, reminiscent of Central Park in November. His foregrounds, especially streams and ponds, frequently mimic the strokes of the leaves below as the spectrum of colors leap off the canvas. Ilyayev was influenced by Post-Impressionist artists, in particular, Vincent van Gogh. Ilyayevs technique is comprised of three main stages: he first creates the composition using a paintbrush. He then applies paint by palette knife creating a layered and heavy texture. Finally he sketches with a thin brush and carves the raised paint. Due to the thickly layered paint, Ilyayevs artwork requires a long period to dry, which can take upwards of a year. Ilyayev, his wife and their children live in Tel Aviv. In addition to painting, Ilyayev teaches art in academies in Israel, an endeavor which he first began in 1998. His works have been shown in various group and one-man exhibitions throughout Israel, the United States, Europe and the Far East. Main group and one-man exhibitions. 1999 Group exhibition, Art & Sculpture union, Tel Aviv, Israel. 1999 Safrai Fine Art Gallery, Jerusalem, Israel. 2002 Decor Atlanta, USA. 2002 Art Istanbul, Turkey. 2003 Gallery Doxa, Tel Aviv, Israel. 2005 Estampa, Madrid, Spain. Gallery, New Jersey, USA. 2006 Art Expo, New York, USA. 2007 Aviram Art Gallery, Kfar Ruth, Israel. 2007 Art Expo, New York, USA. 2009 Talking Walls Gallery, Rishon Lezion, Israel. B id with confidence. The item “Slava Ilyayev A Walk To Remember Original Oil on Canvas Painting Framed 32×36″ is in sale since Saturday, December 02, 2017. This item is in the category “Art\Paintings”. The seller is “waskiesue” and is located in Waddell, Arizona. This item can be shipped worldwide.