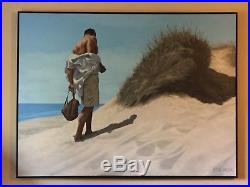 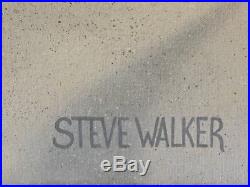 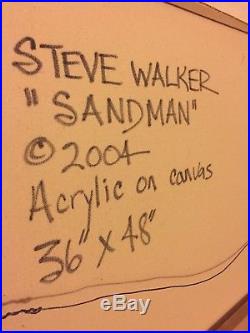 Wonderful opportunity to own an original Steve Walker painting “Sandman”! Biography of Steve Walker. Born in Ottawa, Walker was 19 when he moved to Toronto to study theatre at university. Deeply affected by the impact HIV/AIDS had on the gay community, he gave up his goal of being an actor and started to paint. Drawing was one of Steve Walker’s earliest childhood memories. He recollected drawing pictures from about the age of three or four years old. Drawing came naturally to the Toronto artist, and his love of the art form continued into his adulthood. As a self taught artist, Walker only began painting after a trip to Europe when he was 25 years old. During the trip, he spent much of his time in Europe touring the great galleries and museums. In his words it was the first time he was exposed to great painting, and the first time he recognized the potential power of the art form. “I was moved by something that I was capable of doing, ” he said. Producing art about his life, and the lives of those around him, was as natural to Walker as his first childhood drawings. As a gay man, Walker was acutely aware that he was living during a period of history that was both the best of times and the worst of times. There was more freedom and acceptance for gay men and women, while at the same time AIDS had devastated the gay population. But Walker’s paintings are not about gay people or homosexuality. He described his art as being about love, hate, pain, joy, touch, communication, beauty, loneliness, attraction, hope, despair, life and death. His art includes universal themes regardless of race, gender, socio-economic class, culture or sexual orientation. However, his work is unique because he conveys these themes through the subjects in his paintings – young gay men. “Remove the gender of the painting’s subjects and what we Have is human relationships in general, and one’s relationship to the world itself, ” he said. As a homosexual, I have been moved, educated and inspired by works that deal with a heterosexual context. Why would I assume that a heterosexual would be incapable of appreciating work that speaks to common themes in life, as seen through my eyes as a gay man? If the heterosexual population is unable to do this, then the loss is theirs, not mine. If Walker were an abstract painter or a landscape artist, he said his sexual orientation wouldn’t matter. But since his paintings are about gay life, his sexual orientation became more important than his cultural background, age, or nationality. The focus of his paintings often depicted sadness and loneliness to reflect the reality that much of anyone’s life is sad and lonely. Walker often portrayed people in relationships as separate entities because that is the way he viewed them. He also used a small and consistent palette of colors because he was comfortable with them and the colors provided the desired results. “Color is very powerful and a little can go a long way if used effectively, ” he said. Some colors are very exciting to me, while others are quite offensive. Painting flesh is very exciting because of the huge variations possible within a very small color range. ” Walker’s artworks are very large, always measuring 36″ by 48. He created large paintings because he believed that a large image is more appealing than a smaller one. “Whether it’s a television screen, cinema screen, or an image in a magazine, the size of the image connotes a degree of importance, ” he said. Walker said belonging to an oppressed minority group had been a driving force in creating his art. “Any minority wants and needs to find artistic voices that reflect their own personal situations, and, in doing so, validate and record their lives and cultures for themselves, and for the larger world, ” he said. Walker said he experienced many small rewards during the creative process. “After hours of painting, I stand back and look at something that wasn’t there before — a hand, face, or piece of fabric will exist where there was once a blank canvas, ” he said. As an artist, Walker said it was exciting to be working at a point in history where there is an audience ready to appreciate and consume his creations. “It is very rare to find success as an artist in your lifetime, ” he said. In recent years, Steve Walker’s work has been exhibited in galleries in Toronto, Montreal, Los Angeles, Fort Lauderdale, Key West and Provincetown. The gay community of North America has responded very positively to Walker’s art. Walker once wrote: I hope that in its silence, the body of my work has given a voice to my life, the lives of others, and in doing so, the dignity of all people. The item “Steve Walker Original on Canvas Sandman PRICE REDUCED” is in sale since Sunday, July 22, 2018. This item is in the category “Art\Paintings”. The seller is “rbaker0126″ and is located in Hollister, California. This item can be shipped to United States.