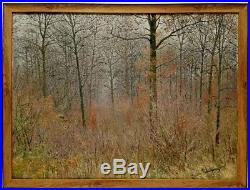 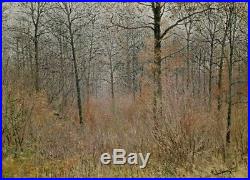 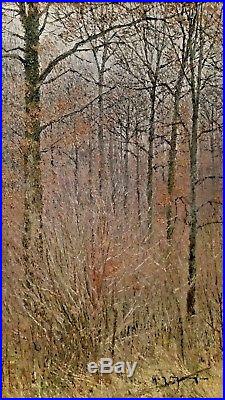 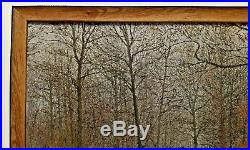 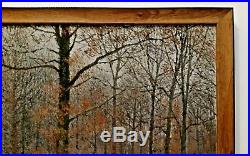 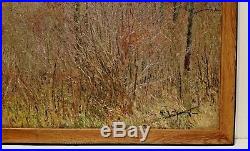 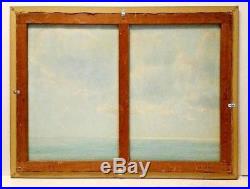 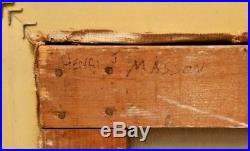 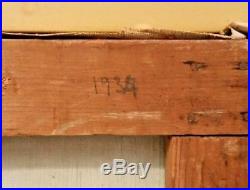 Listed French Landscape artist Henri Jacques Masson Signed, on lower right, his Impressionist Autumn Forest Landscape. It is an Original Oil on canvas and is dated on the stretcher – 1934. There is also a “42 1943″ written on the stretcher but we believe that is an identification #. Densely painted in both paint application and detail. Light sky trickles through the branches, crossing and recrossing themselves. Subtle color palette employed. Magnificent early 20th C. Impressionist piece belongs in your collection! Note: This canvas has an image on the reverse, most likely by the same artist – blue sky over calm water. 1 1/4 Wide Brown wood scoop moulding w/ Black scalloped edge is included complementary in this listing. Canvas measures 23 5/8 X 32 and is in Good to Very Good condition. Outside measure of the frame is 25 3/4 X 34 1/4 and is in Good condition. Please carefully examine all images for condition. Henri Jacques Masson 1908 – 1995? Was born in Spy, a small town near Namur in Belgium. From a young age he was drawn to painting and at the age of 13 he enrolled at the Brussels Royal Athenaeum. Following the death of his father in 1921, he emigrated to Ottawa in Canada with his mother. Upon arriving in Ottawa, Henri Masson worked in an engravers workshop and took courses at the Ottawa Art Association and at the Ottawa Art Club. He exhibited his work for the first time in 1933 as part of a group exhibition, displaying his watercolors, pastels and drawings. In 1936 Henri Masson exhibited his first oil painting at the Ontario Society of Artists in Toronto. His first solo exhibition was be held at the Picture Loan Society in Toronto in 1938, followed in 1939 by another solo exhibition. He also exhibited with the Canadian Group of Painters in New York and Montreal. In 1941, Masson began exhibiting at the gallery of French Art (now Galerie Valentin), was elected member of the Canadian Group of Painters and between the Canadian Society of Painters in Watercolor and the Society of Graphic Arts. In 1945 he was elected President of the Conference of Canadian Artists in Ottawa. It was only in 1945 that Henri Masson decided to finally give up his career as an engraver for prior to this, despite all of his success with his paintings, he was determined to have a steady income to support his family and children. Masson went onto become a teacher at Queens University and he later taught at the Banff School of Fine Arts. In 1955 he received an honorary doctorate from Assumption College in Windsor, Ontario. Masson was primarily a landscape painter. He painted nature, trees, small villages, the sea, boats, lighthouses and boats. He had a particular interest in his French-Canadian heritage and his landscapes were of parts of Ottawa, Gatineau and especially the province of Quebec: Gaspé, Charlevoix especially St. Pauls Bay the Eastern Townships and the Laurentians. Masson primarily painted en-plein air. His oil paintings are imbued with natural and vibrant colors. His paintings are rich in their observations of nature. Whether in his drawings, watercolors or oils, Masson had acute, but subtle, attention to detail. Check out our other art work auctions. You never know the gems you will find! Each and Every day we strive for 5’s. The item “Listed FRENCH HENRI J MASSON Sd ORIGINAL OIL on Canvas IMPRESSIONIST LANDSCAPE” is in sale since Wednesday, November 21, 2018. This item is in the category “Art\Paintings”. The seller is “gagabee” and is located in Forest Hills, New York. This item can be shipped to United States.