Charles Levier Original Oil signed on front AND on reverse side. La Robe 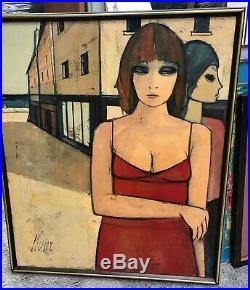 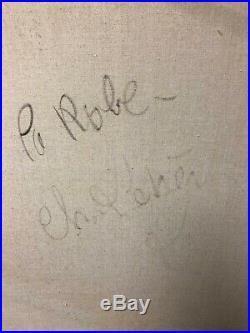 Original Signed oil on canvas in frame. Signed on front and back, titled “La Robe” handwritten on back bywell know artist, Charles Levier. He was born in 1920 of a French father and American mother in Corsica. He held a fascination with color and form that led him, at age seventeen, to the Ecole Nationale Superieure des Arts Decoratifs for private studies. World War II came along and Levier served in the French Army in North Africa, later becoming Liaison Officer with the U. Office of Strategic Services. Coming to America, to live, he divided his time between the USA and France, preparing for his first one-man show, which took place at the Galerie Constantine, in Lyons in 1949, followed by an American debut in Los Angeles in 1950. The year 1955 found him exhibiting at the Galleries de Colisee in Paris and then returning to America where an old friend, Dr. Lilienfeld of Van-Diemen, Lilienfeld Gallery in New York City began to present his paintings. The item “Charles Levier Original Oil signed on front AND on reverse side. La Robe” is in sale since Sunday, December 1, 2019. This item is in the category “Art\Paintings”. The seller is “michellmaimbour_0″ and is located in Sayville, New York. This item can be shipped to United States.