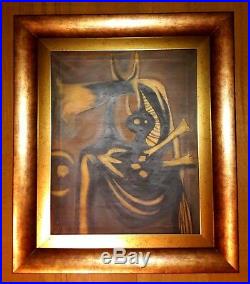 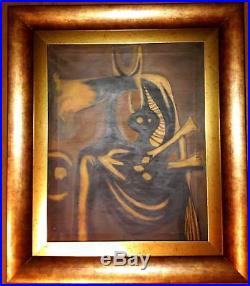 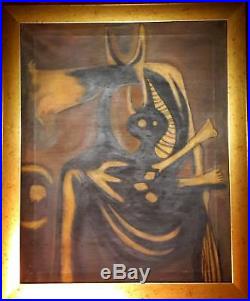 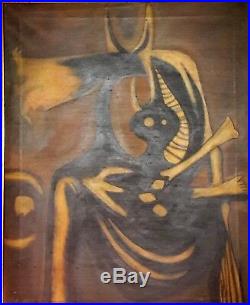 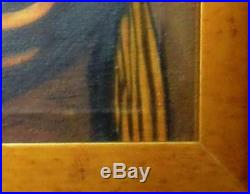 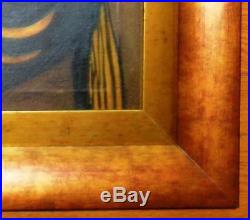 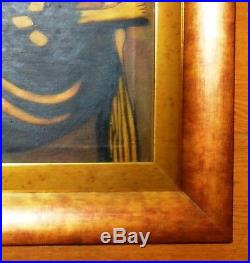 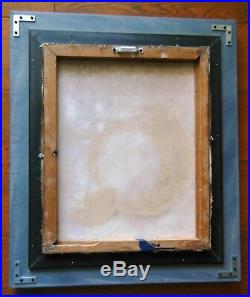 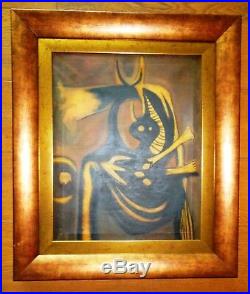 Wilfredo Lam Oil on Canvas Painting. Beautiful art piece, its Provenance is part of a Family State Private Art Collection. Great expression of talent and technique in this art work. Recent Pictures where taken of the actual art piece you will get. Photographs change colors, tone and brightness, etc. The Vanguard Spirit: Modern and Surrealist Masterworks From an Important Estate. Latin American Art May 28. Sotheby’s Park Ave New York. Like many of the most renowned artists of the 20th century, combined radical modern styles with the “primitive” arts of the Americas. While Diego Rivera and Joaquín Torres García drew inspiration from Pre-Columbian art, Wifredo Lam was influenced by the Afro-Cubans of the time. Lam dramatically synthesized the Surrealist and Cubist strategies while incorporating the iconography and spirit of Afro-Cuban religion. For that reason, his work does not belong to any particular art movement. He held the belief that society focused too much on the individual and sought to show humanity as a whole in his artwork. He painted generic figures, creating the universal. To further his goal, he often painted mask-like faces. While Cuban culture and mythology permeated his work, it dealt with the nature of man and therefore was wholly relatable to non-Cubans. In 2015 a retrospective exhibition of his works opened at the Centre Georges Pompidou in Paris; this exhibition is to travel to the Reina Sofia Museum in Spain and the Tate Museum in London afterward. The Jungle, which is considered Lam’s masterpiece, is exemplary of the artist’s mature style. The polymorphism, for which Lam is well known, juxtaposes aspects of humans, animals and plants, creating monstrous, hybrid creatures. The dense composition creates a claustrophobic feeling while the forms remain difficult to differentiate. The figures elongated limbs lack definition, while much emphasis is placed on their large feet, round buttocks, and African-inspired masked heads. Additionally, the iridescent quality of the forms enhances the painting’s tropical feeling. The Jungle was not, however, intended to describe the primitivism of Cuba. Rather, Lam’s intention was to depict a spiritual state that which is surely inspired by Santería; he sheds light on the absurdity that has become Afro-Cuban culture and more specifically on the way their traditions were cheapened for tourism. He sought to describe the reality of his people through the powerful work and gained acclaim and fame for doing so. We trust the Provenance and beauty. We dont advertise or offer C. 41 of 24/01/2004, article 179, code of culture heritage is declared: -In the manner of- not: a water mark, authentic, lithograph, giclée, or. Print of any kind. This art piece is a. Oil on Canvas Painting. The item “WILFREDO LAM OIL ON CANVAS PAINTING” is in sale since Sunday, March 25, 2018. This item is in the category “Art\Paintings”. The seller is “ataquepirata” and is located in McAllen, Texas. This item can be shipped worldwide.