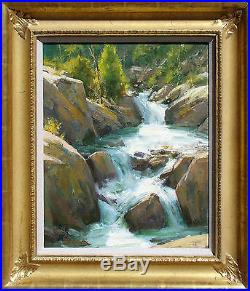 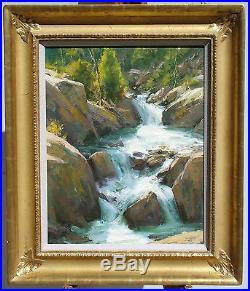 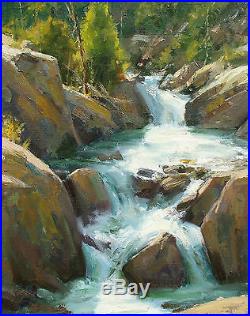 Hand signed by the artist. Framed Size: 27″ x 23″. Image Size: 16″ x 20″. This is not new, and as such there may be some minor wear on the frame. Painting in excellent condition, but the frame has a crack in the top right corner (see 2 main photos above). 100 percent guarantee of authenticity. Certificate of Authenticity is included. Please feel free to send us a message. Check out my other items. Matt Smith was born in Kansas City, Missouri in 1960. At an early age he moved to Arizona. He later moved to Europe where he lived two years in France and one in Switzerland. In subsequent years Smith painted in Germany, Austria and Italy. Smith has lived most of his life in Arizona, where he has a deep attachment and respect for the Sonoran Desert. Smith graduated from Arizona State University with a Bachelor of Fine Arts degree in painting. He spent a vast amount of time studying the traditional styles of such landscapes masters as Maynard Dixon, William Herbert Dunton and Edgar Payne. Most of the time, Smith can be found painting en plein air from southern Arizona to the Canadian Rockies. He also paints the California coast to the mountains of Colorado. I enjoy working in areas where one can travel for miles without seeing the influence of man. When I paint, I feel I’ve hit the mark when I’ve captured a balance between mood, look and feel. You know you’ve succeeded when viewers sense the desert heat or the chill of a mountain snowfall. Smith currently lives in Arizona with his wife, Tracy, who is also a painter. 2010 Merit Award – “Western Rendezvous of Art”. 2009 Merit Award & Best of Show – “Western Rendezvous of Art”. 2006 Merit Award – “Western Rendezvous of Art”. 2005 Merit Award – “Western Rendezvous of Art”. 2000 Robert Lougheed Award – “Prix de West”. 2000 Merit Award & Best of Show – “Western Rendezvous of Art”. 1999 Best of Show – “Tucson Plein Air Paint-Off”. 1997 Red Smith Award – “Western Visions” – National Wildlife Art Museum. 1997 Best of Show – “Emerging City” – San Jose, CA. 2010 June – Southwest Art – “Catching the Light”. 2010 January – Western Art Collector – “Southwest Light”. 2009 December – Southwest Art – “Success Stories”. 2009 July – Art of the West – “A Feeling of Time and Place”. 2007 November – Art of the West – “Twenty One”. 2002 January – American Artist – “Making the Landscape Your Own”. 2001 April – International Artist – “Ask a Master”. 2000 September – Art of the West – “My Passion is Nature”. 1999 May – Arizona Corridors – “Arizona Artists”. 1998 February – Southwest Art – “Desert Vistas”. 1993 December – Art Talk – “Artists Worth Watching”. 1992 March – Art of the West – “Pushing the Limits”. The item “Matt Smith Spring Runoff Signed Original Oil Painting on board 1991 Make Offer” is in sale since Wednesday, March 25, 2015. This item is in the category “Art\Paintings”. The seller is “american_design_ltd” and is located in Aurora, Colorado. This item can be shipped worldwide.