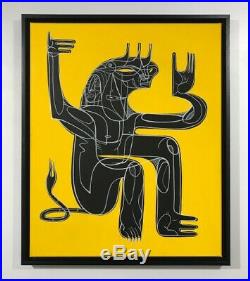 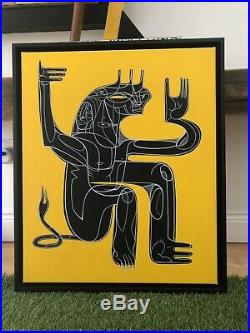 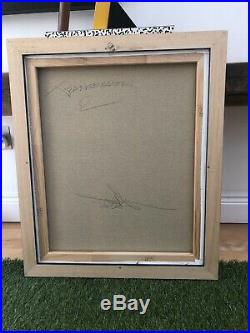 Original Acrylic on Canvas. This is an original painting on canvas. All paperwork and provenance will be supplied. The canvas comes in a black wooden tray frame as framed by the gallery/artist for the show. Doze Green was born in 1964 in New York City. In 1976, he began painting subway cars and became one of the original b-boy members of the Rock Steady Crew. Soon after, he transitioned from graffiti to studio work and mural commissions. In 2010, audio of an interview with Green discussing his work along with a slideshow of his images was featured in The New York Times. Recent projects include a large-scale mural during São Paulo fashion week in Brazil, as well as Crossroads of Humanity, a public mural located at CityCenter in Las Vegas, Nevada. One of Greens works was recently acquired by Grammy award-winning musical artist and producer Kasseem Swizz Beatz Dean and will be exhibited at Scope-Miami 2014 along with a selection of other works from the Dean Collection. 2011 Large scale mural during São Paulo fashion week. 2009 Crossroads of Humanity. Collaboration with David Ellis, New York, NY. 2006 11 Spring Street. Curated by Wooster Collective. Tropic of Cancer Art and Music Benefit, New York, NY. 2003 Grafitti Meets Windows. 2003 Altoids Mural Project. 2001 Sesame Street episode. Painted the Number 9 for the program. 1999 Poster for MUNI. Precita Eyes Mural Project. 1998 Destiny Manifesting mural. Galerie de la Raza, , San Francisco, CA and Paris, France. 1982 Panasonic Omni Theater. (Two-man installation with Dondi White). Signed & Titled on the reverse by the artist. Size: 600mm x 500mm approx. This is the canvas size. This artwork has been kept in an acid fre. Nvironment out of contact from direct sunlight. PLEASE SEE MY 100% POSITIVE. The item “Doze Green Original Painting Transmissions 2 Acrylic on Canvas 2018 Signed” is in sale since Sunday, February 17, 2019. This item is in the category “Art\Paintings”. The seller is “harvey1919″ and is located in Ballynahinch. This item can be shipped worldwide.