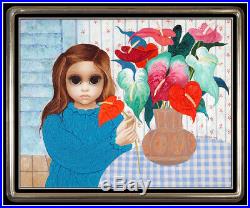 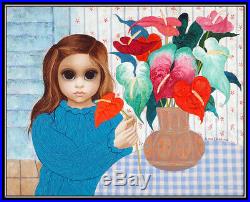 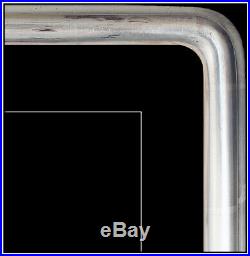 Margaret Keane Authentic & Large Original Oil Painting on Canvas, Professionally Custom Framed in its Vintage Moulding and listed with the Submit Best Offer option. Accepting Offers Now: The item up for sale is an Original Oil PAINTING on Canvas by Keane of a beautiful young girl with Big Eyes, that retails for thousands more than our asking price. Margaret Keane is an artist forever famous for the emotion and passionate ideals that her images exhibit. Here her talents capture innocence and exuberance in a poetic way with the use of vibrant color and intricate detail. Furthermore this painting titled, “Flower Girl Original”, looks absolutely spectacular in person with the custom wood frame as a perfect compliment. Yet, the painting has been listed with the Submit Best Offer option, so name your own price now. Because, at this incredible value, it will not be around long and the first person that meets our bottom line will be the lucky new owner. You do not want to miss this authentic work from the modern art master, Margaret Keane. Margaret Keane (1927 -):An influential artist know for her children with “Big Eyes” whose art was actually published under her husbands name in the 1960s, Walter Keane. Walter tried to claim credit for the work which eventually lead to their divorce. At the divorce hearing Margaret challenged former husband to a paint off so the judge could determine who the work was completed by, he declined the invitation. In 1986 Keane won the ruling and once again began to paint under her own name but with a happier and brighter style. Her works are a fixture in pop art culture and museums around the world. In 2014 “Big Eyes” was released, chronicling her career as an artist and her life as a suppressed wife. Submit Best Offer, ALL OFFERS WILL BE CONSIDERED. Worth mentioning is the fact that Keane is widely considered one of the most influential modern female cubism artists ever. Andy Warhol said, I think what Keane has done is just terrific. It has to be good. If it were bad some people wouldn’t like it. ” Thus retail galleries would be asking significantly more than what we are for this oil painting on canvas titled, “Flower Girl Original, that depicts the delicate portrait of a child who appears to be staring directly at the viewer. As you can see Keane has incorporated her full realm of fascinating genius into this one artwork. The painting is HAND SIGNED in the lower right corner, has remained in excellent condition since it was painted in 1980, and comes with a Gallery Letter of Authenticity. So remember again, this piece is listed with the submit best offer option, meaning it’s likely to sell before the end of this listing. This painting is of impressive craftsmanship and size, measuring approximately 24″ x 30″, and, 30 x 366 with its exceptional custom frame which was constructed specifically for this work. Margaret Keane’s art has been exhibited in major museums around the world, and can be found in some of the most prestigious public and private collections worldwide. The item “Margaret Keane Original Oil Painting on Canvas Signed Modern Big Eyes Portrait” is in sale since Sunday, April 7, 2019. This item is in the category “Art\Paintings”. The seller is “neiman123″ and is located in Minneapolis, Minnesota. This item can be shipped worldwide.