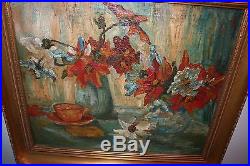 This is an original oil painting on canvas, unsigned, approximately 26″ x 22″, which is quite possibly painted by Vincent Van Gogh. This painting was brought into the United States around 1905, from Paris to Indianapolis. September 9, 2013: A new Van Gogh painting authenticated by the Van Gogh museum; this was after years of the owner being told the painting could not be a Van Gogh, including being told this by Van Gogh museum officials. The painting has been restored and cleaned. On the reverse, someone has written “Vincent Van Gogh” on the stretcher bars. The stretcher bars and canvas are clearly very old. The frame is new. We believe it a stong likelihood our painting is by Vincent. If this is not an original Van Gogh, it could well be: After Van Gogh, in the circle of Van Gogh, or a very good copy of a Van Gogh. It could also be the work of a. Noted Russian painter around the turn of the 20. Century who copied many Van Goghs, and his work is quite valuable. We recognize it is a gamble. If the purchaser does the validation work and this proves to be by Van Gogh, it would clearly be worth tens of millions if not more. If it proves to not by Van Gogh, it may still be worth multiple millions. For one who has the resources and the will, we believe this to be an excellent investment opportunity- far better chances of winning than the Powerball lottery. Please feel free to make us a serious offer. In the interest of full disclosure. During that time frame, we sent photos of the painting to the Van Gogh museum in Amsterdam asking their opinion, and after a long delay, received a very short, terse reply, stating they did not believe the painting to be by Vincent. We received many offers of hundreds and of low thousands of dollars, all rejected. We also received much written abuse accusing us of low moral character and questioning our intelligence. We are serious and honest. We have thick skin, but can easily do without such comments and abuse. We welcome and will respond to serious questions about the art work. We are not the best photographers- we’ve done the best we can considering the glare from the surface of the painting. The painting can be made available by appointment to be examined by serious purchasers or experts. Examination to be at a conference room in Brookville, Indiana 70 miles east of Indianapolis. The item “Post Impressionist Dutch Original Oil on Canvas” is in sale since Monday, August 19, 2013. This item is in the category “Art\Paintings”. The seller is “aogiftshopcom” and is located in Brookville, Indiana. This item can be shipped to United States.