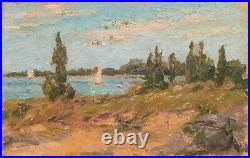 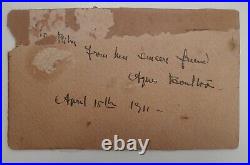 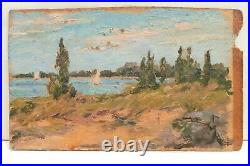 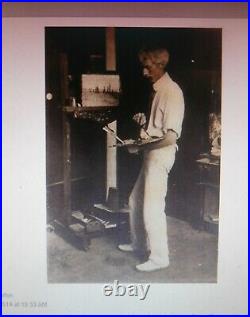 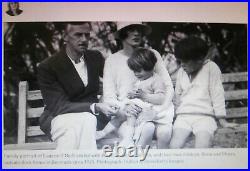 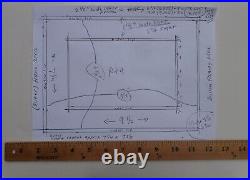 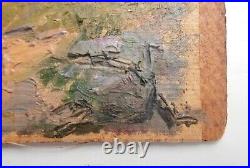 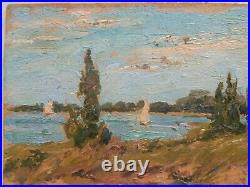 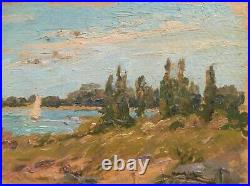 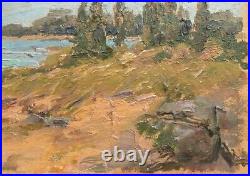 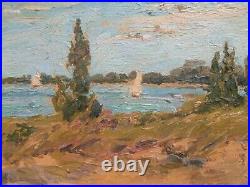 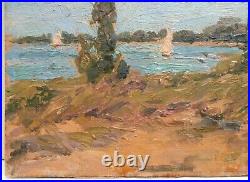 Antique oil on canvas on board plein air painting “Sailing On The Manasquan” by Thomas Eakins Circle (“The Boys”) artist / President of the Art Students League of Philadelphia, PAFA, and Jersey Shore American Impressionist painter Edward “Teddy” W. By 17 years of age, she was a new star on the scene as a pulp writer and ended up marrying Eugene O’Neill. Her daughter, Oona, married Charlie Chaplin. In Eugene’s letters, he calls his father-in-law “Eddie”. Boulton sent him a crucifix when O’Neill was working on something with the theme of exorcism. Excess paperboard mounting should, in my opinion, be partially trimmed (right side) — inscription on back won’t be affected: To Rita? From her sincere friend Agnes Boulton April 15th 1911. Further provenance: Lyle Germer, Dover, NJ. Edward Boulton is a listed artist in the Who Was Who In American Art. He exhibited at venues such as the Pennsylvania Academy of the Fine Arts (PAFA), the Art Institute of Chicago (AIC) and the Society of Independent Artists (first exhibition of the SIA). Board measures 4 1/4 x 6 7/8 inches. For best result, recommend framemaker such as Motyka. See picture for what I’d ask him to do: 1.5″ liner + 2.5″ wide molding carved frame = approx. 11.6 x 14.1 overall size. A nameplate would look great, with “Sailing On The Manasquan” as the title. This painting may be considered a (finished yet unsigned) study for that. Also see the’Thomas Eakins In New Jersey’ exhibition page on the John F. Peto Studio Museum site to watch a you-tube video relevant to this artist and his family. Agnes and Eugene O’Neill were Greenwich Village / Provincetown (P-town) people and friends with all the artists such as Charles Demuth. Edward Boulton was the inspiration for the professor-father in O’Neill’s’Strange Interlude’. When they were first married, Eugene and Agnes lived in Edward Boulton’s household at West Point Pleasant. This painting is a scene at the New Jersey shore at (West) Point Pleasant, near Manasquan Beach but on the River. The artist’s residence was’Old House’ on the corner of Herbertsville Road and Hall Avenue. It was situated next to a grove of pine trees that stood between the house and the Manasquan River. In the end, there were only 16 students from the PAFA who had the guts to leave with Eakins. Of those, only a few ended up very close to the master. Boulton was one of those few. Eakins and Boulton weren’t just painting. They were photographers, sculptors, etc. Using photographs to advance their level of painting and casting (sculpture) to create items like the death mask of Walt Whitman. Edward Boulton emerged as an American Impressionist. His best oils are painterly, with fluid brushwork. As time went on, I think PAFA artists like Edward Boulton and Bucks County maestro Edward Redfield became better painters. The art establishment and the American public didn’t like Impressionism. Per the efforts of the Ten American Painters, the style became gradually more accepted starting around 1900. By 1910, American Impressionism was at it’s peak. Boulton was committed to Eakins, so he was in the’Inner Circle’ and a collaborator. He ended up with gifts from Eakins (who regularly visited him at West Point Pleasant) such as paintings, photography, etc. That have been important material for Eakins scholars. While I usually think of Eakins as a Realist, if you look at his oil sketches in the Philadelphia Museum of Art, they look American Impressionist to me: “Study For Swimming Hole”, 3 3/4 x 5 1/2 inches; “Shore Scene”, 4 x 5 1/2 inches; “Landscape Sketch”, 6 1/4 x 7 inches (oil on canvas on cardboard), etc. Also in the PMA, they have many items attributed to Boulton yet also called Circle of Eakins. Note: For a very brief period upon graduating from high school, ca. 1910, Agnes Boulton attended art school in Philly. She decided it wasn’t for her and became a writer instead. Another young lady with the same story at the time in Philly was Rita Wellman born 1890; later Mrs. Leo, who was friends with Charles Demuth. Agnes was friends with Demuth, too. Rita ended up becoming one of the most produced women playwrites of the Provincetown Players. Agnes’ handwriting is hard to read, but if this painting is inscribed “To Rita”, I’d think Ms. Wellman would be that young lady. This item is in the category “Art\Paintings”. The seller is “cadmium24″ and is located in this country: US. This item can be shipped to United States, Canada, United Kingdom, Australia, Japan, China, Korea, South, Indonesia, South Africa, Thailand, Hong Kong, Bahamas, Israel, Mexico, New Zealand, Singapore, Switzerland, Norway, Saudi Arabia, United Arab Emirates, Qatar, Bahrain, Malaysia, Chile, Colombia, Panama, Jamaica, Barbados, Bangladesh, Bermuda, Brunei Darussalam, Bolivia, Egypt, French Guiana, Guernsey, Gibraltar, Guadeloupe, Iceland, Jersey, Jordan, Cambodia, Cayman Islands, Liechtenstein, Sri Lanka, Monaco, Macau, Martinique, Maldives, Nicaragua, Oman, Pakistan, Paraguay, Reunion, Uruguay.