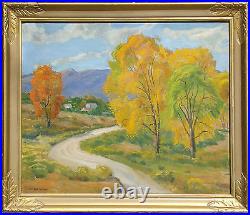 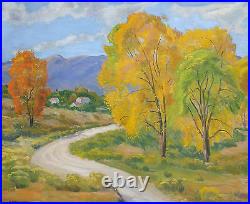 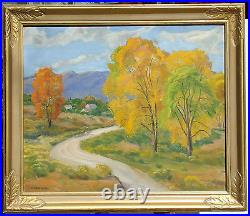 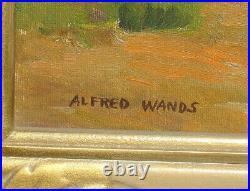 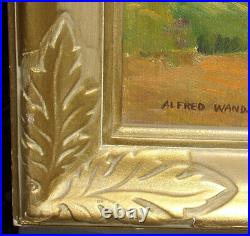 Hand signed by the artist. Framed Size: 30″ x 35″. Image Size: 24″ x 30″. Circa 1990s to early 2000s. Frame is not new and may have some minor wear. Painting appears to be in excellent condition. 100 percent guarantee of authenticity. Certificate of Authenticity is included. International (or HI, AK) buyers will be notified via invoice of cost. Please feel free to send us a message. Alfred James Wands was born in Cleveland, Ohio on February 19, 1904. Raised in Cleveland, he graduated from the Cleveland Art Institute with honors. He then spent time in Paris, France studying at the Academie Julian. He also studied in Brussels, Munich, and at Western Reserve University. During this period he had multiple works accepted into the Carnegie Institute’s International Exhibits. Three years after this time period, he and his wife Dorothy, moved to Denver, Colorado where he became the Head of the Art Department of Colorado Women’s College. He taught there for seventeen years. A few years after moving to Denver he became the daily hunting and fishing writer for the “Rocky Mountain News”. He also published a very popular art instructional book entitled “How To Paint Mountains”. In 1930 Wands discovered the painting community of Taos, New Mexico. He would spend the next eleven summers there. He became friends with, and painted with, many of the famous Taos artists of that period. By 1943 he had become the Camp Artist at the YMCA of the Rockies, where he taught summer art classes. He later became the Chairman of their Religious Programs and Adult Advisory Committees. By 1947 he had quit his teaching position at the Colorado Woman’s College to devote full time to his painting. He was successful from the start. By 1955 he opened his own Studio and Gallery in Estes Park, Colorado. From the early 1950’s he could be found spending his winters painting along the California Coast, and in Mexico. He spent many winters during the 1950’s in Carmel, California painting images of the Monterey Peninsula. In 1995, along with his son Robert, he opened a gallery in downtown Estes Park. Known as the “Dean of Colorado Landscape Painters”, he served three times as the President of the Denver Artists Guild. He was the Chairman of the Denver Art Commission for 16 years. Wands was a long-time member of the Denver Artists Guild and the Denver Art Commission. He was also a member of the Cleveland Society of Artists, Ohio Watercolor Society, and Chicago Galleries Association. While spending winters in Carmel he was chosen as an Artist Member of the Carmel Art Association. Wands exhibited at the Cleveland Museum of Art, Cleveland School of Art, Denver Art Museum, Denver Artist’s Guild, Western Arts Association, Carmel Art Association, International Watercolor Annual Exhibition, Carnegie Institute in Pittsburgh, Chicago Art Institute, Pennsylvania Academy of Fine Arts, the Corcoran Gallery in Washington, and the Sangre De Cristo Art Center, to name a few. In 1939 he participated in the New York World’s Fair. He was an award winner in many of the venues in which his works were exhibited. His works are in the permanent collections of the Cleveland Museum of Art, Palace of Legion of Honor in San Francisco, Kansas City Art Institute, Museum of Arts and Sciences in Brooklyn, New York, Colorado Springs Art Center, Western Reserve University, Denver University, Denver Public Schools, Sangre De Cristo Art Center, and University of Southern Colorado, to name a few. Alfred Wands died on October 27, 1998 in Sequim, Washington. Until his death, at the age of 94, he was active in the Olympic Camera Club and the Sequim Art Club. Robert Wands, son of the artist. The item “Alfred Wands Hand Signed Original Oil Painting with Gold Frame fall trees autumn” is in sale since Thursday, March 26, 2015. This item is in the category “Art\Paintings”. The seller is “american_design_ltd” and is located in Aurora, Colorado. This item can be shipped to United States, Philippines, Cayman islands. 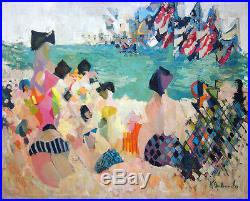 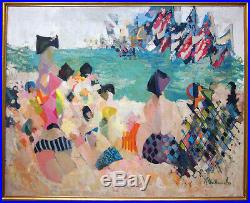 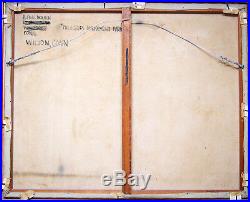 ALFRED CHADBOURN Signed 1953 Original Oil – LISTED. This is a magnificent original museum quality signed original oil on canvas painting by internationally acclaimed artist ALFRED C. This rare original masterpiece is entitled. And dates from 1953. In it, Chadbourn has successfully combined Abstract Expressionism and Realism to produce this spectacular seaside. This extraordinary painting is signed by the artist on the front lower right A. Chadbourn’53” and signed again and inscribed on the verso “A. ” It is in excellent condition, measures 40″ x 50 and is framed in a gold-leafed wooden swan frame. Alfred Cheney Chadbourn (Chip Chadbourn) was born in 1921 in. He spent his childhood in. And then studied art at Academie De La Grande Chaumiere. After serving as a tank sergeant in the Pacific during World War II, he resumed his art studies in. At the Ecole Des Beaux Arts, 1947-50. Chadbourn’s first one-man show in. In 1949, was patronized by Jean Cocteau. His paintings are in many museums, important corporate and private collections including the. Boston Museum of Fine Arts, Corcoran gallery in. Chicago Art Institute, National Academy of Design in. And Portland Museum of Fine Arts in. He is a member of the National Academy of Design. Chadbourn taught at the. And at the Rowayton Art Center, CT. Until his death in the summer of 1998. The item “ALFRED CHADBOURN Signed 1953 Original Oil Palisades Amusement Park LISTED” is in sale since Monday, June 23, 2008. This item is in the category “Art\Paintings”. The seller is “skf-fineart” and is located in Los Angeles, California. This item can’t be shipped, the buyer must pick up the item. 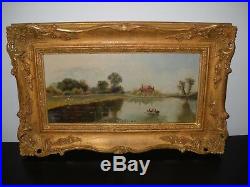 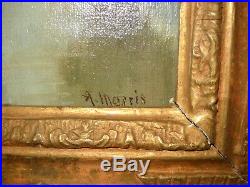 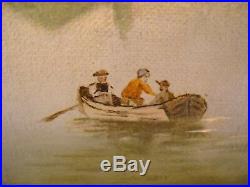 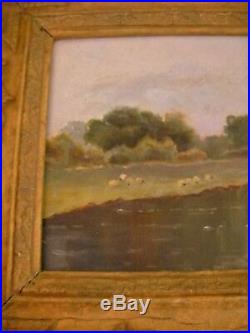 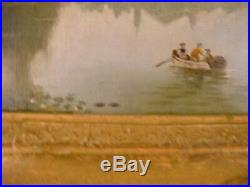 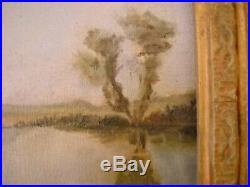 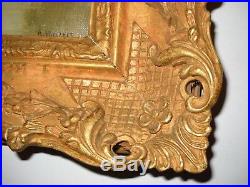 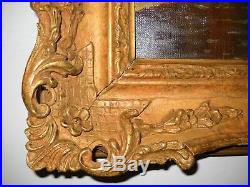 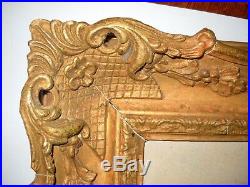 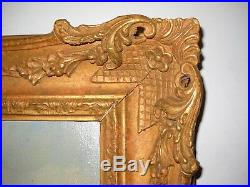 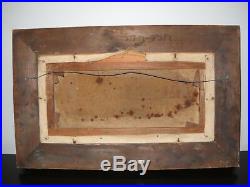 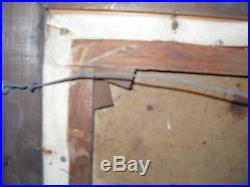 Alfred Morris was a visual painter who worked in Lewisham, Deptford, England. And flourished as an artist from 1853 – 1896. Morris exhibited his landscapes at the Royal Academy in 1866 and 1870. He also exhibited at the British Institution and The Society of British Artists. Of which he was a member. Oil Painting on Canvas. No repairs or tears. [20.3 cm x 40.6 cm]. [33 cm x 53.3 cm]. Appears to be original ornate frame. Small crack bottom left side of frame. The item “Alfred Morris British 19th Century Oil on Canvas Landscape withOriginal Frame” is in sale since Tuesday, March 12, 2019. This item is in the category “Art\Paintings”. The seller is “art-books-collectibles” and is located in Sacramento, California. This item can be shipped to United States. 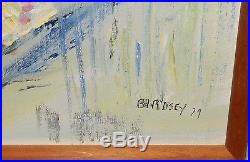 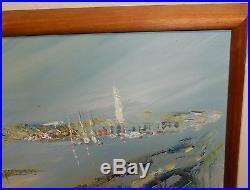 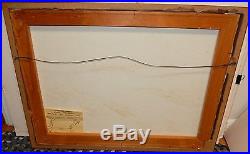 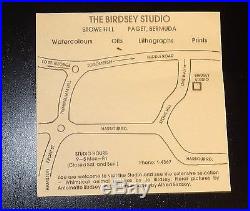 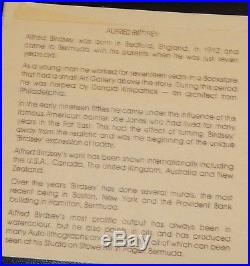 UP FOR SALE IS THIS ORIGINAL OIL ON CANVAS BERMUDA SAIL BOATS SCENE PAINTING SIGNED BY ARTIST ALFRED BIRDSEY. THE SIZE IS 19″ X 25″1/2. THE CONDITION IS GREAT. The item “ALFRED BIRDSEY BERMUDA SAIL BOATS SCENE ORIGINAL OIL ON CANVAS PAINTING” is in sale since Tuesday, March 08, 2016. This item is in the category “Art\Paintings”. The seller is “jenderus” and is located in Hawthorne, California. This item can be shipped worldwide. 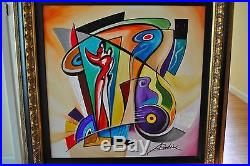 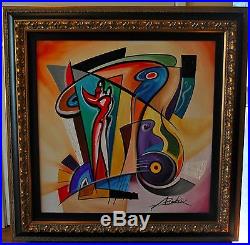 ORIGINAL acrylic painting by AlFRED GOCKEL. This is not a lithograph or print of any kind. This is an original acrylic on canvas painting by Gockel. It is titled ” Tripping”. It is 32 x 32 inches canvas size. The frame is included in the price and probably adds about 5-6 inches on each side. It has surely gone up in value since then. We must sell due to family circumstances. Please see our other art for sale in our listings. The item “Alfred Gockel- ORIGINAL acrylic painting on canvas 32×32, framed” is in sale since Tuesday, February 21, 2017. This item is in the category “Art\Art from Dealers & Resellers\Paintings”. The seller is “mha_mha_gi5ntn4aw” and is located in Pebble Beach, California. This item can be shipped to United States.