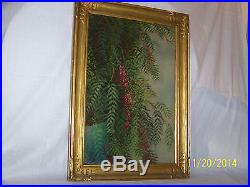 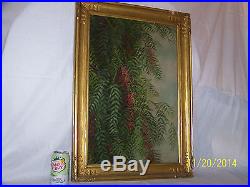 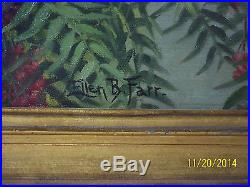 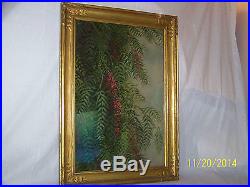 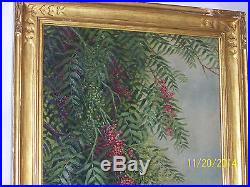 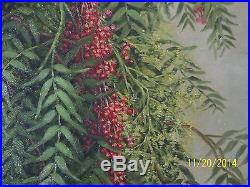 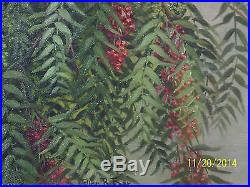 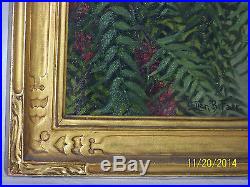 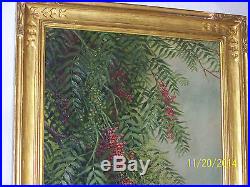 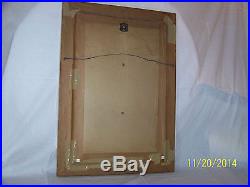 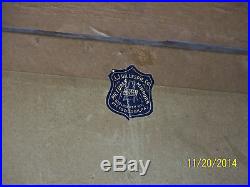 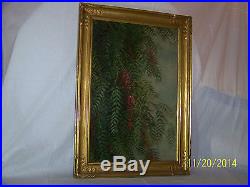 Original Oil On Canvas Floal Still Life Art Deco Painting Signed On Bottom By Artist. Original Art Deco Newcomb Macklin Gold Toned Carved Wood Frame. Gallery Sticker affixed to Verso. MEASURES: Framed- 28 1/2″ x 20 1/2″ – Unframed- 24″ x 16 1/2″. BIOGRAPHY: Born in New Hampton, New Hampshire, Ellen Farr became a resident of Pasadena, California in 1895 and was one of the early women artists in the West. She painted many canvases of missions, pepper trees and still lifes, and her paintings found ready markets in the United States and abroad. She was a graduate of the New Hampton Institute and Thetford Academy, and in 1861, married Evarts Farr, who became a U. After his death, she had a studio in Boston from 1883 to 1887, and painted florals and other still lifes. Examples of her work from this period are in the Littleton Public Library in New Hampshire. In 1887, she went to California and began the most productive period of her career. In Pasadena, she bought an old vineyard and built a mission style studio on the property. In California, she painted many canvases that included missions, pepper trees, and still lifes of Native American baskets, fish, game, and florals, and her work found a wide market. She became one of Pasadena’s most prominent artists. She died in Naples, Italy where she had gone for her health and where she only lived for five weeks. The circumstances of her death were very unusual. She went to Italy to see the great works of art there and she died while in Italy. Some of Ellen’s work is on permanent display in various town buildings in Littleton, New Hampshire. Her husband, Everts Farr was a native of that town, and Ellen lived there for several years. Everts Farr was a Civil War hero and later a US Congressman, Republican, New Hampshire. My sister, Susan Luca, adds this to the Ellen Farr story: When Ellen went to Italy, she was planning on living there for several years. She even mortgaged her house in California to finance the extended stay. After graduating from the New Hampton Institute and Thetford Academy, she married E. After the death of her husband she had a studio in Boston until the early 1880’s when she moved to southern California. Farr bought an old vineyard in 1895 after settling in Pasadena and building a mission style studio on the property where she painted still life subjects and scenes of the missions. Farr in 1861, after graduating from the New Hampton Art Institute and Thetford Academy. After the untimely death of her husband, she kept her studio in Boston for a while, but, in the early 1880s, decided to move to Southern California where she eventually settled in Pasadena. She painted still lifes, portraits and studies of local Indians, and California mission scenes. She became one of the earliest female artists to paint Western subjects. She died in 1907 while on a trip to Italy. Please pay for items within 48 hours! We sell fine art and antiques and collectibles and are described in the listing and pictures are included which are part of the description. Almost all reasonable offers are considered so please make offers where stipulated. There are NO EXCEPTIONS! The item “Ellen Frances Burpee FarrOriginal Oil On Canvas Newcomb-Macklin Frame Art Deco” is in sale since Sunday, May 14, 2017. This item is in the category “Art\Art from Dealers & Resellers\Paintings”. The seller is “1kul57″ and is located in Laurel, Maryland. This item can be shipped to North, South, or Latin America, all countries in Europe, all countries in continental Asia, Australia.