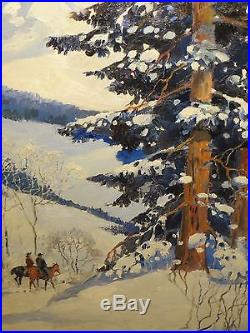 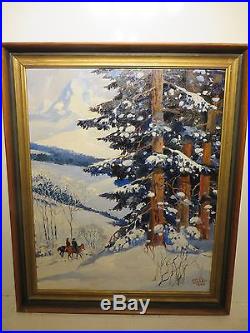 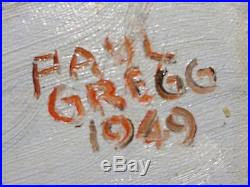 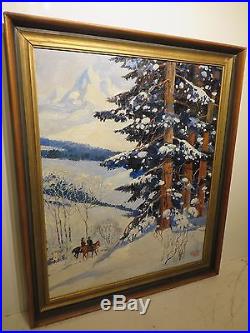 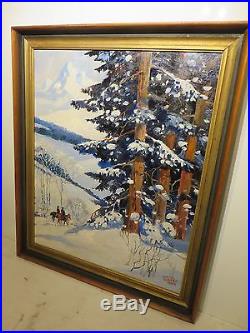 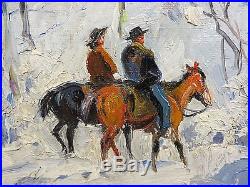 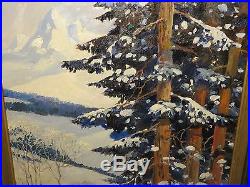 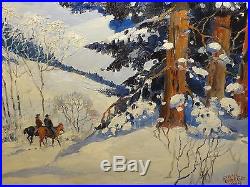 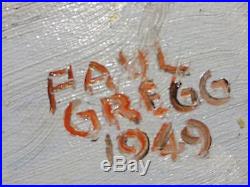 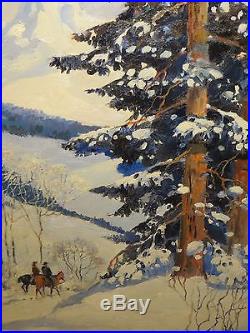 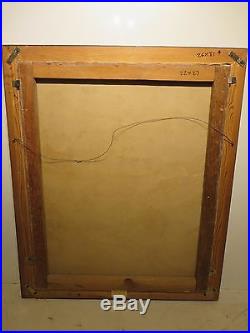 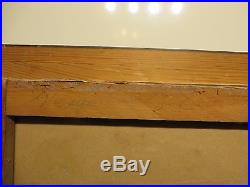 Here’s a rare 22×27 original oil painting on canvas that has just been relined do to some crazing. Painted by the famous Colorado listed artist Paul Gregg. Showing a couple on horses riding thought the fresh snow covered Colorado Rocky Mountains. Most of his art paintings has been collected by the Colorado Museum, so only a few rare pieces remain… Please look at all my other oil paintings; Texas Hill Country Bluebonnets: Salinas Robert Wood Fred Darge Rolla Tayler Gaitha Browning W. Slaughter WRThrasher Roger Ikers Freeman Garvin Harris Olan Travis Jerry Malzahn Kovach Krogle Sharp Don Warran Lazzaro Hardy Martin Kendrick Vail William Orth Corson Franklin Blackman Gibson Garza Shelton Roney Shepler Dillard Nabinger Massey Mae Barbee etc. Paul Gregg was active/lived in Colorado, Kansas. Paul Gregg is known for historical-narrative, illustrator. Born Baxter Springs, 1876; died Denver, CO, July 9, 1949. Painter, specialized in western scenes. Left Kansas at age 17 to spend a year at the St. Louis Museum of Fine Art. Worked for the St. Joined the Denver Post staff as an illustrator in 1902. Biography from American Eagle Fine Art. Historically important to the State of Colorado, Paul Gregg’s artistic endeavors are like windows framing the events of times past. Six hundred and four of his paintings remain in the archives of the “Denver Post” in Denver, Colorado, as silent reminders of the struggles that developed this territory. Gregg was born in Baxter Springs, Kansas, where his pioneer parents had settled after coming west by oxcart. He saw firsthand the ways of the Indian and observed that a cow gets up rear-end first, the horse front-end first, the buffalo is immune to diseases, and the front and rear wheels of a stagecoach do not have the same number of spokes. When he painted a covered wagon, it was not a copied scene from a history book, but was an exciting picture from his earliest memory. At the age of seventeen, Gregg left Kansas to spend a year at the St. Louis Museum of Fine Arts. He then was employed by the St. Louis Republic, at a salary of twelve dollars a week. While on a vacation in Denver, in 1902, he met H. Tammen and Frederick G. Bonfils, who persuaded him to join the “Denver Post” staff. As new photography was still in its infancy, newspaper artists not only drew cartoons and painted decorative scenes, but were also called upon to illustrate new events — sometimes from sketches on the spot, sometimes from descriptions, and sometimes from a photographic memory and imagination. Out of his ability to produce life-like illustrations for western stories, Gregg developed his oil paintings for the “Sunday Denver Post” magazine section. For forty years he produced western scenes — one a week, totalling well over 2,000 in all — he also did countless cartoons and sketches. He developed his oil painting from a scant sketch, working nonstop until completed. In the last twenty years of his career, Gregg enlisted the talent of his poet friend, Gene Lindberg, to add verses to his works. The joint effort became a full-page weekly color feature in the Post. Each feature developed from short notes jotted down by Paul or his wife, Marian, as they traveled. Lindberg wrote of his friend, He was above all a storyteller in oils, and the stories were as varied as the West itself — old as the fur trade, new as the streamlining of planes. From: American Western Art, Harmsen Collection, Volume II, By Dorothy Harmsen, 1977, Donnelley & Sons Company, The Lakeside Press. The item “22×27 RARE original 1949 oil on canvas painting by PAUL GREGG Always Beautiful” is in sale since Wednesday, June 07, 2017. This item is in the category “Art\Paintings”. The seller is “starship2563″ and is located in Dallas, Texas. This item can be shipped to United States.