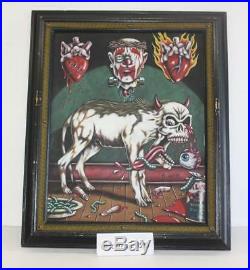 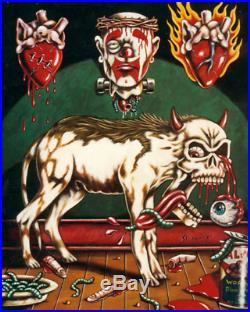 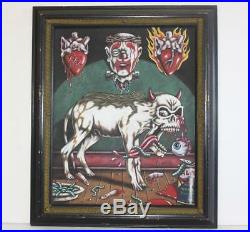 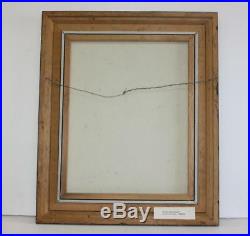 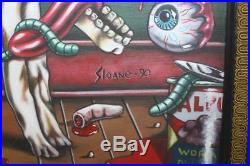 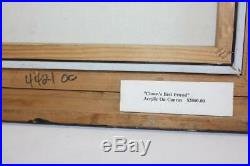 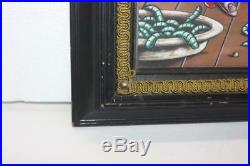 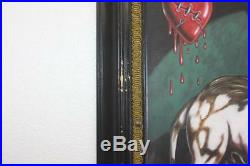 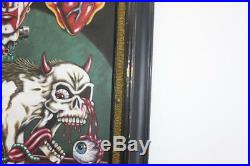 Offered for sale is a rare, original R. This acryllic on canvas masterpiece is called “Clown’s Best Friend” created in 1990. Canvas measures 15.5″ x 19.5″, and is placed in a 24.5″ x 20.5″ black frame with gold color embroidering on the inner border. Painting is fine with no damage on the canvas. Frame however, is heavily worn and contains surface damage, but that is all. Photos shown are of the actual painting for sale. Sloane Original Acryllic on Canvas Painting “Clown’s Best Friend” 1990. K Sloane Original Acryllic on Canvas Painting “Clown’s Best Friend” 1990. About: Richard Kenneth Sloane, was born, January 05, 1949, to William and Mary Sloane. Ric, was the youngest of 4 children. Kick the can, spin the bottle, Mickey Mouse, Superman, comic books and a belief in Truth, Justice and the American Way! Captivated by MAD Magazine and underground comics, Ric, observed that the illustrations and stories seemed to be more realistic than the facades people presented as their lives. The “Happy” and “Carefree” attitude people portrayed to each other, when looked at more closely, was a mask they hid behind while in the public eye. Once inside the privacy of their homes, the mask was removed and the true person emerged. The child who “fell out of a tree” and broke his arm, that was really beaten by his father for spilling a glass of milk. The clergy, posed as moral leaders and keepers of the only true path to salvation, who behind closed doors steal from us our innocence while threatening damnation if we cry out. It seemed to Ric, that everyone was aware of the reality, but it was never discussed or acknowledged… As a kid, you notice these things, but don’t give them too much thought. This realization never sat easy in Ric’s mind and so began the journey that led him to his enlightened state. Influenced by the underground comics scene and Rock’n Roll, Ric, began to draw the world as he truly saw it. Although his images frightened most “normal” people, he found inspiration in Bob Dylan, Tom Waits and legendary poster artist Rick Griffin. He was compelled to continue. The thought that normalcy was a mask led him to the metaphor of the clown face as “the true face” and disfigurement as representation of the tormented soul that lay beneath the shallow surface. As he embraced the darker truths of life, his artwork progressed and got noticed by an ever growing fan base. He illustrated Punk Rock album covers and flyers as well as “zine” covers and comic books. He collaborated with such luminaries as Ed “Big Daddy” Roth and Jeff Gaither and alongside such greats as Robt. Williams, XNO, Joe Coleman, The Pizz and Todd Schorr to name a few, became one of the founding members of an art movement labeled “Low Brow” – a “tongue in cheek” jab at the elitist “High Brow” art world. The disillusioned youth had found in R. Sloane, a visionary prophet, shattering the illusion of the perfect world and unashamedly exposing the world for what it was. Like the generation before them embraced Norman Rockwell’s illusionary depictions of a fictional “American Dream, ” the new generation held tight with clenched fists to R. Sloane’s raw and uncensored images of the dark and seedy world they lived in. His artwork unrepentantly screamed This is what’s really going on! And in the embrace of his message his followers found a unity in each other and were no longer alone in the darkness. The Devil’s greatest achievement was to convince the world he didn’t exist. ” The serial killer, who by all accounts is a “nice” and “decent human being until the gruesomeness of his crimes is discovered. The passerby at an accident, gawking, not to see if he can help, but to see how much blood and suffering he can make out before moving on to a Latte’ and Biscotti, unmoved by the sorrow that befell his fellow man. We know the truth, but choose instead to exist in a sheltered fantasyland because we can’t bear to face the brutality of the world we live in. This disconnect tears away at our souls, piece by piece. This is where Rev. Help to heal the tattered and torn fragments of your inner being. Help you to accept the truth and find a way to exist within it. Help to strengthen your weak and feeble mind. Help to relieve you of the heavy burden of the skeletons in your closet. Help you to open your eyes and see, perhaps for the first time. The truth will set you free! Salvation is yours for the taking, just reach out and take hold of the guiding hand of an enlightened soul. Get Supersized Images & Free Image Hosting. Create your brand with Auctiva’s. Attention Sellers – Get Templates Image Hosting, Scheduling at Auctiva. Track Page Views With. Auctiva’s FREE Counter. The item “R. K. Sloane Original Acryllic on Canvas Painting Clown’s Best Friend 1990″ is in sale since Tuesday, November 13, 2018. This item is in the category “Art\Paintings”. The seller is “electronics1540″ and is located in Los Angeles, California. This item can be shipped to United States.