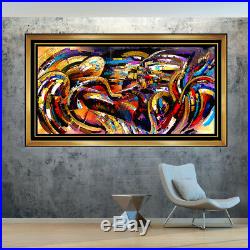 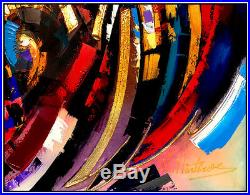 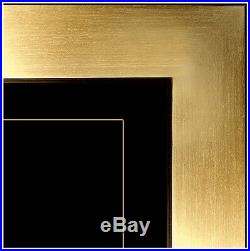 Martiros Manoukian 36 x 72 Authentic & Original Acrylic Painting on Canvas, Professionally Custom Framed and listed with the Submit Best Offer option. Accepting Offers Now: The item up for sale is a spectacular and Original Acrylic Painting on Canvas by Iconic Contemporary Artist, Martiros Manoukian, that retails for thousands more than our asking price. Martiros is forever famous for the bold color, thick texture, expressive passion and many other characteristics that his artwork exhibit. Additionally, of all the masterpieces he created, often his most desired images are intricate and idealistic abstract renderings. The one here, “Harmony Original”, combines his his finest talents with vibrant color and vivid detail, giving the viewer fascinating incite into his full realm of remarkable genius. It is absolutely stunning with the gold finished moulding enhancing the stunning imagery. Yet we have listed it here with the Submit Best Offer option so name your price now. At this incredible value, it won’t be around long as the first person that meets our bottom line will be the lucky new owner. You do not want to miss the opportunity we are presenting for you to own an authentic work, by the Master of Modern Art, Martiros Manoukian. Martiros Manoukian: An Armenian artist now living in the United States, is one of an elite group of renowned artists who has had thousands of original works collected worldwide. He is one of the most successful artists in The Far East, United States and Europe. He has participated in numerous international exhibitions and received many honours and awards. “Beauty will not save the world, but the world should save Beauty”. This is the thought that motivates one of the most famous modern artists of our time. Submit Best Offer, ALL OFFERS WILL BE CONSIDERED. However, this is your chance to own an important work of art, at a much better price than those retail outlets command. The artwork here, “Harmony Original “, is an alluring creation of brilliant swatches of red, purple and blue, contrasted with gold, making it besides the largest painting by Martiros we have ever made available, also one of nicest. The immaculate artwork is of impressive craftsmanship and size, measuring approximately 36″ x 72″ and 48″ x 84″ with the custom frame constructed specifically for this painting. Furthermore, it has remained in excellent condition since it was completed by Martiros in 1990 (dated in the lower left), is hand signed in the lower right corner, and comes with a Gallery COA. So remember again, we have listed this piece with the Submit Best Offer option, meaning it will likely sell before the end of this listing. Martiros Manoukian’s art has been exhibited in major museums around the world, and can be found in some of the most prestigious public and private collections worldwide. The item “MARTIROS Manoukian Original Acrylic Painting On Canvas Large Signed Abstract Art” is in sale since Friday, March 22, 2019. This item is in the category “Art\Paintings”. The seller is “neiman123″ and is located in Minneapolis, Minnesota. This item can be shipped worldwide. 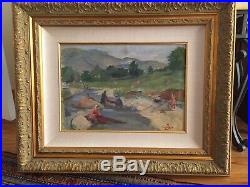 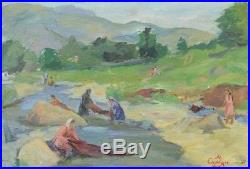 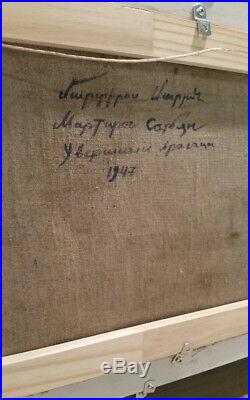 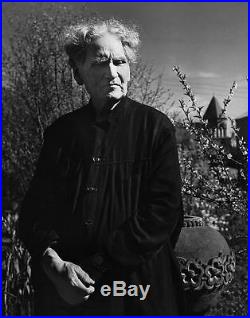 Here is your rare chance to own an original artwork from one of the greatest Armenian painters of the 20th century. Martiros Sergeyevich Saryan (1880 – 1972). Height by 16.73 in. Signed and dated lower right: M. Saryan (in Russian), 1947. Signed, titled and dated on the reverse: Martiros Saryan (in Armenian and Russian), Near Aragats Mountain, 1947. The golden custom frame is newer, added for presentation and included in the sale. This painting has been authenticated by a Saryan expert. Martiros Saryan, Saryan also spelled Sarian, born February 16 (February 28, New Style), 1880 in Novy Nakhichevan, near Rostov-na-Donu, Russiadied May 5, 1972, Yerevan, Armenian S. (now in Armenia), major Armenian painter of landscapes, still lifes, and portraits. Saryan received training in painting at the Moscow School of Painting, Sculpture, and Architecture (18971903) and then worked in the studios of the noted painters Konstantin Korovin and Valentin Serov. Soon Saryan became a member of a group of Moscow Symbolist artists, and he began exhibiting his brightly colored paintings. He continued to paint during his travels to Constantinople (1910; now Istanbul), Egypt (1912), southwestern Armenia (1913), and Persia (1914; Iran); these trips inspired a series of large, frescolike works in which he attempted to communicate the sensuousness of the Middle Eastern landscapes. He also incorporated into a number of his paintings the Persian motifs he had seen in the Middle East. Like many Russian artists of the early decades of the 20th century, Saryan was greatly influenced by Impressionism. He was also interested in the paintings of the French artists Henri Matisse and Paul Gauguin, as can be seen in his use of areas of flat, simplified color. In 1921 Saryan moved to Yerevan, where he organized and became director of the museum of archaeology, ethnography, and fine arts now called the National Gallery of Armenia. He thereafter spent most of his career painting scenes, especially landscapes, of his adopted homeland, often employing the Impressionist technique of using vivid, dappled color to capture the effects of light. He also painted many floral still lifes as well as portraits. In addition to painting, Saryan illustrated books, including Armenian Folk Tales (1933), and he designed sets and costumes for the theatre. He served as a deputy to the second, third, and fourth convocations of the U. S Supreme Soviet (the countrys highest legislative body). Among his awards were three Orders of Lenin. Nature’s ways are wonderful and unfathomable. The grain swells in the soil, the sprout grows and flowers when the time comes and then it bears new fruit and so does not die. We are like grain. We never die because we are One with Nature. To understand this is to comprehend Immortality, and to be inspired by it.. It is with this conviction that I have lived my Life, andlike anyone elsemy life, is a storehouse of my experience, a Life of aspirations, sorrows, joys and triumphs. Painting will be well box packed and courier tracked. You will be provided the tracking information. The item “Martiros Saryan, Near Aragats Mountain, 1947 ORIGINAL OIL ON CANVAS” is in sale since Saturday, December 8, 2018. This item is in the category “Art\Paintings”. The seller is “varouja-half” and is located in Reseda, California. This item can be shipped worldwide.