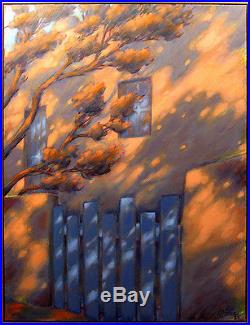 NO REASONABLE OFFERS REFUSED ON 5700 OTHER ITEMS! “Fall In Sante Fe”. Original Painting by Gustavo Novoa. Original Acrylic Painting on Canvas. Hand signed by the artist. Canvas Size: 36″ x 48″. Framed Size: 37″ x 49″. Frame is old, but in good shape. Painting has no damage. Percent guarantee of authenticity. Certificate of Authenticity & appraisal is included. Please feel free to send us a message. Check out my other items. For Colorado & New Mexico residents. Gustavo Novoa is the only son of a family of lawyers from Santiago, Chile. He attended the Academy of Fine Arts and Law School there, only to learn that structured careers were not for him. His first one-man show was sponsored by the Chilean Ambassador at the Maison de L’Amerique Latine in 1961. The late Queen Victoria Eugenia of Spain sponsored his second show in Lausanne, Switzerland in 1962. Showing in galleries In the Faubourg St. Honore and the Salon de la Jeune Peninture completed his Parisian background but, by 1965, he had become an adoptive New Yorker. ” He admits to having been “lured like many others by the American Dream on one hand and such movies as’West Side Story,”Breakfast at Tiffany’s,’ and’The Wizard of Oz’ on the other. A successful partnership with Guy Burgos and later Lady Sarah Spencer Churchill led to the opening of the Burgos Gallery on Manhattan’s East Side in 1965. By then his style had evolved into textured oils that the New York Times critic Studart Preston reviewed saying, What Novoa seeks to discover in his often fanciful landscapes and still-lifes is their identity, that special something that makes them unique. Bonds with reality are very hard to shake once you establish them. With this premise in mind Novoa constructed, without the help of the real jungle or zoos, a new Paradise of mystical serenity. The environment he created exceeded the limitations of Time and Space. Panthers, lions, zebras, tigers, elephants, peacocks, and rhinos, deprived of their ferocity, seemed to observe the observer with wise and amused tolerance. Novoa’s one-man shoes of the early 70’s in New York, Paris, Palm Beach and Beverly Hills established him as a champion of ecology and wild-life preservation. His animals were primitive and painted in lush and colorful backgrounds. The publication, in 1977, of his book, “Jungle Fables, ” for which he both wrote the text and executed the paintings, was a collection of rhymes on “Vice and Virtue” that gave a new dimension to his animals making them more anthropomorphic and philosophical. By 1981, Novoa’s paintings had changed again: His show, “The Grand Tour, ” sent his animals prowling the major cities of the world, from the Spanish Steps in Rome to the Left Bank in Paris through the Great Pyramids and back to Park Avenue in New York. It was perhaps the most surrealist of Novoa’s shows. In 1983, a series of shows entitled “Rainbow” opened in Chicago, Palm Beach, and Beverly Hills. From the arc of that rainbow Novoa’s animals shifted their attention to outer space, becoming transfixed by astral phenomena, seeking to unravel the meaning of full and crescent moons, sunrise and sunset, the alignment of the plants, the rings of Saturn, the passage of Venus and Mars. This was the theme of his last lone-man show, “Moon Lovers and Others, ” at the Wally Findlay Galleries in New York in February of 1985. But by Fall of 1985, after their creator had spent time in Santa Fe, New Mexico, these jungle characters seem to have gotten lost in outer space. He depicts the Arizona desert and the Indian pueblos with haunting and surreal qualities under heavy impasto. He calls it his “adobe” period. Developed by Webgyor Global. Analyzing “Smart Counters” only at inkFrog. Add a map to your own listings. The item “Gustavo Novoa Fall In Sante Fe Original Painting on Canvas, New Mexico, OBO” is in sale since Wednesday, December 02, 2009. This item is in the category “Art\Paintings”. The seller is “american_design_ltd” and is located in Aurora, Colorado. This item can be shipped worldwide.