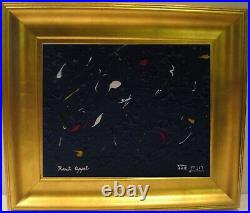 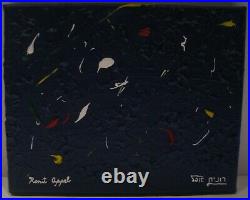 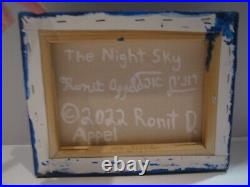 Beautiful Original Acrylic on Canvas Painting by American/Israeli Artist Ronit D. Painting’s Title: The Night Sky. Size: With frame: Approximately 14 x 12 inches. Unframed: Approximately 10 x 8 inches. The attached photo showing the painting framed is a projected image of approximately how the painting will look in its frame. The painting is signed in Hebrew and in English on the front and back of the painting and is titled on the back of the painting. Born in 1986 and raised in an Orthodox Jewish family in New York, Appel’s connection to Israel blossomed when she visited Israel for the first time at the age of 11. Since then, Israel became the focal point of Appel’s life and at the young age of 17, she immigrated to Israel, where she studied Law and Government in Hebrew, mastering the language in a short period of time. Appel did what many would have thought impossible, earning a highly-coveted position as a member of the school’s Law Review and graduating with honors, near the top of her class. In 2013, Appel’s law career was derailed when she was abruptly terminated from a NYC law firm she had worked at for years after refusing to cooperate with corruption at the firm. That incident was a pivotal moment in Appel’s life. Though what should have been a brilliant career as a lawyer was derailed, Appel was propelled to new horizons. A great admirer of both Jewish/Israeli art and art of the Arab world, in July of 2013, Appel opened a fine art gallery in Manhattan specializing primarily in Jewish and Israeli art and art of the Arab world. The following year, a local publication described Appel as a NYC Renaissance woman. In 2018, Appel began creating her own art and within just a few years her beautiful paintings could already be found in collections throughout the United States. Like many great artists, Appel’s past is rife with tragedy. But Appel’s art is a story of triumph and of light. It is the story of the city of Jerusalem. This painting is offered for sale. Ine art gallery in Manhattan. This item is in the category “Art\Paintings”. The seller is “ronitdappel” and is located in this country: US. This item can be shipped to United States.

« Frank KULON from the Jewish generation to. Original oil on canvas
Original Western Acrylic on Canvas »