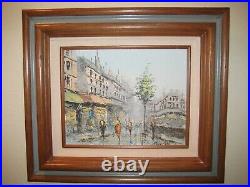 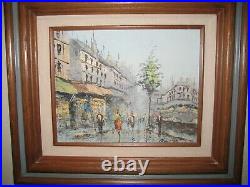 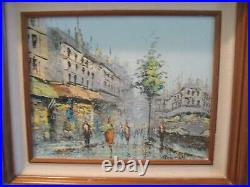 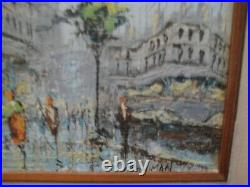 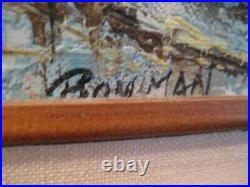 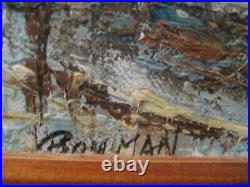 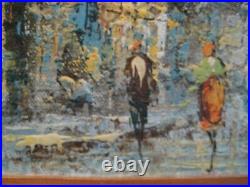 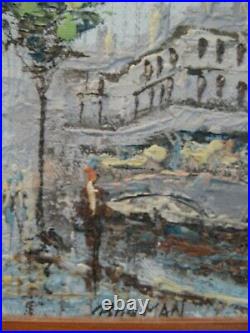 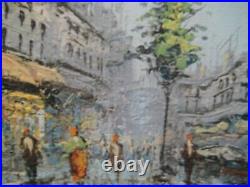 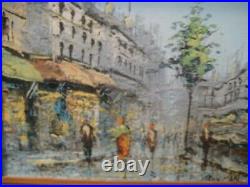 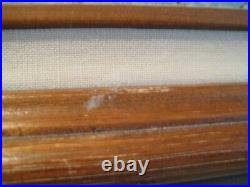 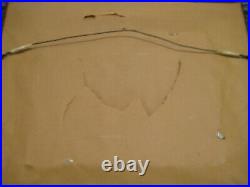 For sale is an Exceptionally Beautiful and Rare Vintage Signed Mid Century Modern Work by Listed Artist Dorothy Louise Bowman. This Original Signed, Framed and Matted Painting Measures Approximately 15 7/8″ x 13 7/8″ for the Frame and Approximately 10 1/2″ x 8 1/4″ for the Painting. Dorothy Louise Bowman , painter and printmaker, was born in Hollywood, California on 20 January 1927. She studied at the Chouinard Art Institute in Los Angeles under Rico LeBrun and Jean Charlot. She furthered her studies at the Jepson Art Institute and the Otis Art Institute in Los Angeles, the San Francisco Art Institute, and at Webster College in St Louis. Dorothy met fellow artist Howard Bradford, also a painter and printmaker, while studying at Chouinard. They married and eventually settled in Big Sur, California where she painted with her friend and neighbor, the author, Henry Miller. Bowman was a member of the Western Serigraphic Society and she received numerous awards for her serigraphs. Her work was shown at the Brooklyn Museums National Print Show between 1954 and 1962, and the Library of Congress National Print Shows and the Museum of Fine Arts Boston shows between the years 1954 and 1971. She was selected for Fifty American Printmakers , an exhibition that was circulated by American Federation of Arts to Japan and Moscow. Bowman also received commissions from the International Graphic Arts Society. Former Achenbach Foundation for Graphic Arts Director, E. Gunter Troche, wrote of her work. Dorothy Bowman specializes in serigraphs with a Californian flavor. She has been able to give to this technique an intricacy of design and a luminescence of color seldom reached by others. The recent cityscapes of Dorothy Bowman are aglow with excitement in their moody yet stimulating contrasts. Bowmans work is represented in the collections of the Achenbach Foundation for Graphic Arts, San Francisco; the Museum of Fine Arts Boston; the Brooklyn Museum, New York; the Library of Congress, Washington, D. The Los Angeles County Museum of Art; the Metropolitan Museum of Art, New York; the National Gallery of Art, Washington, D. And the New York Public Library. This Piece is a Rare Original, NOT one of her more common Serigraphs and is a wonderful example of her semi-abstract impressionist style. The painting itself is in pretty good condition but could use a cleaning. Two small cracks in the paint starting to form left of the tree. One small dent in the frame on the right side and a small dent to the frame in the lower middle. The paper was sealed extra tight on the backing and so over time holes have formed. Our goal is to gain your trust by consistently offering items of the highest quality with accurate descriptions and photographs. ALL ITEMS PACKAGED WITH CARE TO ENSURE THEY ARRIVE IN THE SAME CONDITION! United States Post Office no longer offers surface or ground. We do not mark merchandise values below value or mark items as “gifts” – US and International government regulations prohibit such behavior. The item “SIGNED Mid Century Modern Listed Artist Dorothy Louise Bowman Original Painting” is in sale since Sunday, March 22, 2020. This item is in the category “Art\Paintings”. The seller is “ursamaj57″ and is located in Broomfield, Colorado. This item can be shipped to United States.