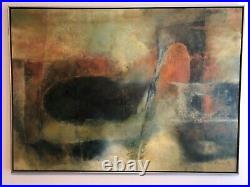 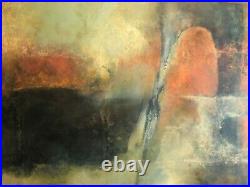 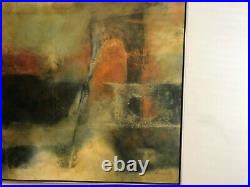 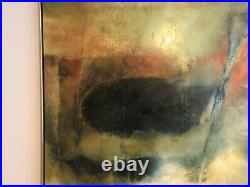 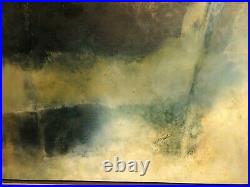 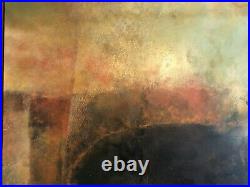 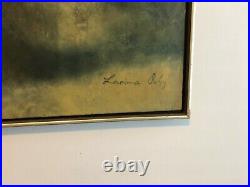 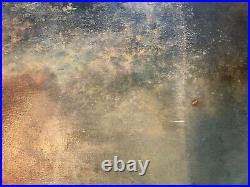 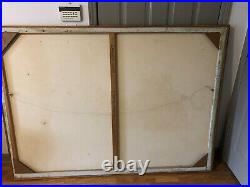 Mid Century 1950’s-60’s Monumental Abstract Oil Painting Signed Larissa Osby. The painting is in very good vintage condition, it has some amazing deep earth tones, its a beautiful painting the pictures don’t do it justice. The only issues with the painting are 3 very small white paint drips, and that the painting has the original frame, so it would most likely need to be re framed and if you want have it professionally cleaned. In her youth, Larissa Geiss Osby struggled to find freedom in her native Ukraine, but once she escaped from there at age 15 she used her freedom to express herself through art and antiques and inspired others to use their artistic talent. Osby, an abstract painter named artist of the year in 1983 by the Pittsburgh Center for the Arts, died Wednesday at St. Barnabas Health System in Richland. Osby was born in Artemowsk, Ukraine, to a German father and Russian mother. When World War II started, the family was persecuted to the point that the teenager had to place a brick a certain way outside their home to let her father know it was safe to return home after work, said her daughter, Karin OSullivan of Franklin Park. Osby used her German language skills to pose as a German citizen when she boarded a train out of Ukraine. Her parents joined her when the war ended and she moved to the United States under a sponsorship from the University of Pittsburgh to work in medical labs. She used drawing skills she had learned in Ukraine to create medical sketches of daily lab work and began making abstract paintings during her off hours. In Germany, she discovered abstract art, which wasnt allowed in Russia, where everything had to be realistic, Mrs. It was breaking away from the very rigid form in Russia and she loved it. Once she married the late Howard Osby and had two children, she found floor space wherever the family lived to create a studio for her large paintings. She would spread unstretched canvases on the floor as large as 6 by 8 feet and often would use bricks and plywood to create bridges so she could navigate around her work as she painted. Her husband was a skilled woodworker and created gold-leaf frames for her work. In addition to oil paint, she used materials such as cardboard or netting to press onto the canvas or attach to it to create a collage. Before her sons and daughter were of school age, it wasnt unusual for Mrs. Osby to set up easels for them to paint with her. Much of her mothers work was inspired by nature, Mrs. OSullivan said, and she regularly pulled out a sketch book during family driving vacations to capture a scene she would use for inspiration later. Over the years, she created thousands of paintings, her daughter said, many of which have been shown at exhibits in the U. And abroad, including the Carnegie International, Associated Artists of Pittsburgh and Pittsburgh Center for the Arts, where colleagues voted her artist of the year in 1983. I never understood [her abstractions] at the level she did, but we knew they were beautiful, Mrs. OSullivan said, adding that her mother switched to making natural stone jewelry when rheumatoid arthritis made it too difficult to paint on the floor. She just had to produce something creative all the time. Her colleagues appreciated her talents. She was a very brilliant woman and an amazing artist, said Gloria Karn of Ohio Township, who painted with her as a member of the Abstract Group. She was very original. Everything she did had her special mark. Her Ukrainian roots led to more trauma in her life after she visited her home area in 1991. As a result, for several years Mrs. In addition to painting and making jewelry, Mrs. Osby was a self-taught classical pianist and a voracious reader, especially on topics involving history. The item “Mid Century 1950’s-60’s Monumental Abstract Oil Painting Signed Larissa Osby” is in sale since Thursday, March 26, 2020. This item is in the category “Art\Paintings”. The seller is “vondenburg_jewelry” and is located in Atlanta, Georgia. This item can’t be shipped, the buyer must pick up the item.