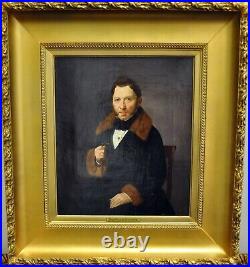 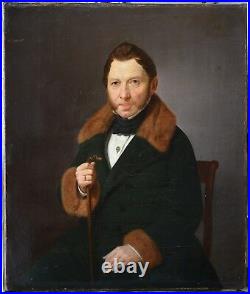 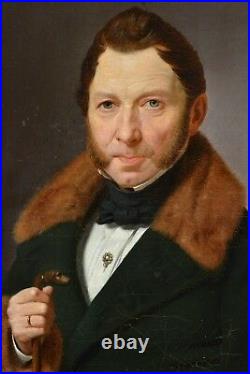 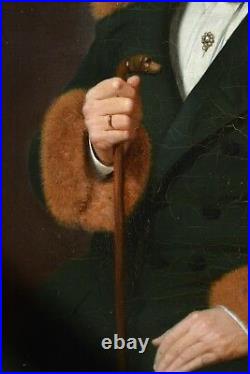 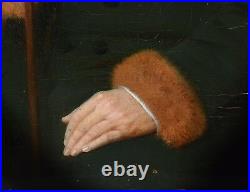 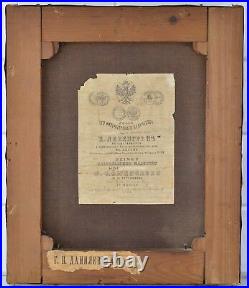 Speaking of this portrait, you need to remind a few things.. First of all, in the estate society a portrait is a privilege. In the overwhelming majority of cases, the representatives of the highest social strata became the heroes of the portraits. The portrait, in which the necessary image conventions (posture, entourage, expensive clothes, furs, carved cane) are observed and agreed, all indicate the high social status of this character. The portrait as if says: Before you is a noble man. Thus, a noble portrait for centuries represents not only a nobleman, but also a person who has elegant ease, that is, a feature that has long served as a bodily expression of nobility and upbringing, and therefore of belonging to the elite. Oil painting on canvas 37 x 32 cm (roughly 14.6 x 12.6 in) / in frame 57 x 53 cm (22,44 x 20.86 in). Very Good condition, wear, cracks etc. Overall it looks great and ready to hang. Please study good resolution images for precise cosmetic condition. Gerhardt Wilhelm von Reutern (17 July 1794, Walk – 22 March 1865, Frankfurt) was a Baltic-German military officer and painter who co-founded the Artists’ Colony at Willingshausen. He was born into a noble family of Baltic-Germans dating back to the 15th Century. He participated in several campaigns during the Napoleonic Wars as a cavalry lieutenant and lost his right arm at the Battle of Leipzig. While recuperating with relatives, he took up drawing as a hobby. In the Summer of 1814, he made the acquaintance of Johann Wolfgang von Goethe, who urged him to become a painter. They maintained a steady correspondence until Goethe’s death in 1832. After serving in several adjutant positions, he resigned from the Army in 1819 with the rank of lieutenant-colonel. As part of his convalescence, he moved to Willingshausen and was married there in 1820. Four years later, he met Ludwig Emil Grimm and the idea for an Artists’ Colony was born. They focused on genre scenes and landscapes from the Schwalm. Having been self-taught up to this point, he began taking private lessons from his friend Grimm. In 1835, he moved to Düsseldorf and studied with Theodor Hildebrandt at the Art Academy there. Two years later, he was appointed to a position as Court Painter for the Imperial Russian family, with the right to live abroad, a concession obtained by his friend Vasily Zhukovsky, who would later become his son-in-law. In 1841, he invited his friend Jakob Fürchtegott Dielmann to oversee the Artists’ Colony and spent his time moving between Russia, Germany, Switzerland and Italy. After three years of travelling, he settled in Frankfurt where he established a studio at the Villa Metzler. In the early 1860s, he was forced to give up painting due to failing eyesight, rheumatism and unspecified “nervous complaints”, probably brought about by the successive deaths of several friends and family members; including his wife, daughter Elisabeth and youngest son, Christoph. A number of countries have partially closed their borders to passenger traffic, which means that a large portion of the air traffic has been stopped. This is giving rise to restrictions in transport capacity, and thus problems transporting parcels and letters to large parts of the world. All EU / EUROPE countries; Australia; Hong Kong; Japan; Canada; Russia; South Korea; USA. In many cases, the transport of letters and parcels will take place by land or sea, and may take longer than normal! We are working to find ways to send consignments to other countries in the world. AND LET OUR LORD BLESS YOU! KEEP COOL AND TAKE CARE! Our store is located in the beautiful city of Stockholm. Useful to mention that we are trying to acquire wonderful art and antiques throughout Scandinavia. We own all necessary equipment for making firm and reliable packaging. We do appreciate your questions and inquiries, concerns and ideas! We cordially thank you for your time and wish you good luck in winning these auctions! The item “19th century Antique Russian Beautiful Oil Painting Portrait of Wealthy Nobleman” is in sale since Monday, April 8, 2019. This item is in the category “Art\Paintings”. The seller is “scandinaviantique” and is located in Stockholm. This item can be shipped worldwide.