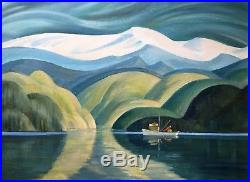 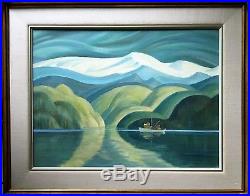 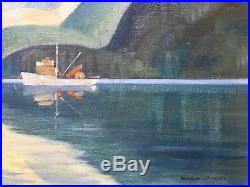 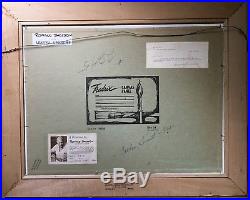 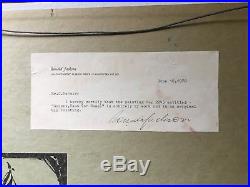 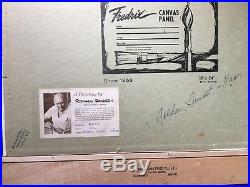 Great Modernist Oil Painting by well listed Canadian Artist Ronald Jackson! Golden Sunset, Nass (or Naas). Oil on canvas board. Signed, titled, dated, inventory number, letter of authenticity verso. 17 1/2 x 23 1/2 inches (visible image). 18 x 24 inches canvas board. Framed – 24 1/2 x 30 1/2 inches outside dimensions. Fully authenticated painting by leading Canadian modernist painter Ronald Jackson in his very typical style. No issues with the painting. Frame linen liner has a few small spots of soiling. They are much more in galleries and through dealers. SEE MY OTHER LISTINGS FOR OTHER GOOD, NEW TO THE MARKET ART. Ronald Jackson was long recognized for his masterful depiction’s of British Columbia’s magnificent coastal region. In his themes, his flowing quality of line and his subtle use of colour, one can see that Ronald Jackson was deeply involved in interpreting the power of the Canadian Landscape – a Canadian tradition he shared with such eminent painters as Lauren Harris, A. Jackson and Emily Carr. One of the things Ronald prided himself on was that he never had a complaint about any of his marine paintings from a sailor or anyone who knows anything about boats – and some sailors roar with laughter at some marine paintings. Major private and corporate collections throughout the world. Royal Bank of Canada. British Pacific Building Ltd. Dominion Foundries and Steel Co. Inspector-Vancouver Auxiliary Police during World War 2. Founding Member-Society of Marine Artists. There is an anatomy about a boat, the same as there is about a human being and unless you understand this anatomy, you can’t paint the boat. I’ve had my hand at building boats in order to understand them. ” “Putting together a painting is like making a cake. Nature may give us the ingredients, but we can’t just dump them all into a bowl and expect that a cake will come out of it. Ronald Jackson, the late Vancouver painter, has been recognised for his masterful depiction of British Columbia’s coastal region. With the aid of a strong network of friends he was able to travel to areas that no other artist had been. Jackson attended schools in Victoria and England. He graduated from the Slade School of the University of London and also studied at the Grand Chaumier, Paris, and the Otis Art Institute in Los Angeles. He was commissioned to paint for the Governments of the United Kingdom, Canada and British Columbia. Extraneous details that exist in nature have been eliminated from the finished canvasses and we are left with the compositional elements, the mountains, the sea, and the boats. The works retain harmony and a sense of space influenced by the weight and solidity of the rock, the stillness of the surroundings and the depth and contrast of these monumental forms. The item “Original Ronald Jackson (1902-1990) Oil on canvas board 1980 Modernist Canadian” is in sale since Sunday, September 16, 2018. This item is in the category “Art\Paintings”. The seller is “artprender” and is located in Houston, Texas. This item can be shipped to United States, Canada, United Kingdom, Denmark, Romania, Slovakia, Bulgaria, Czech republic, Finland, Hungary, Latvia, Lithuania, Malta, Estonia, Australia, Greece, Portugal, Cyprus, Slovenia, Japan, China, Sweden, South Korea, Indonesia, Taiwan, South africa, Thailand, Belgium, France, Hong Kong, Ireland, Netherlands, Poland, Spain, Italy, Germany, Austria, Israel, Mexico, New Zealand, Singapore, Switzerland, Norway, Saudi arabia, United arab emirates, Qatar, Kuwait, Bahrain, Croatia, Malaysia, Brazil, Chile, Colombia, Costa rica, Panama, Trinidad and tobago, Guatemala, Honduras, Jamaica, Barbados, Bangladesh, Bermuda, Brunei darussalam, Bolivia, Ecuador, Egypt, French guiana, Guernsey, Gibraltar, Guadeloupe, Iceland, Jersey, Jordan, Cambodia, Cayman islands, Liechtenstein, Sri lanka, Luxembourg, Monaco, Macao, Martinique, Maldives, Nicaragua, Oman, Peru, Pakistan, Paraguay, Reunion.