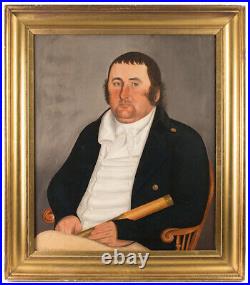 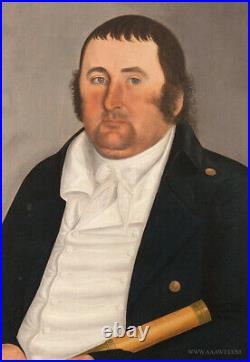 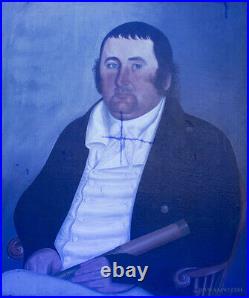 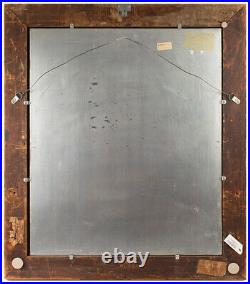 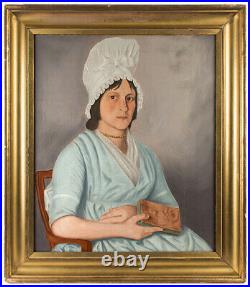 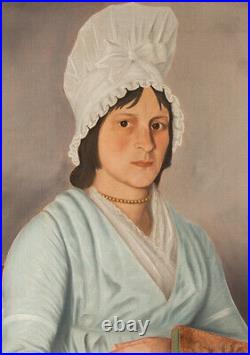 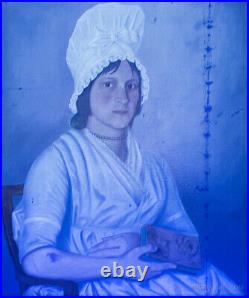 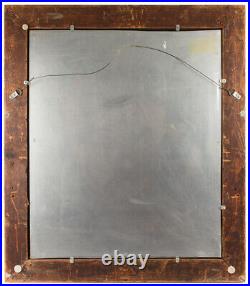 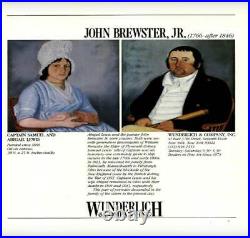 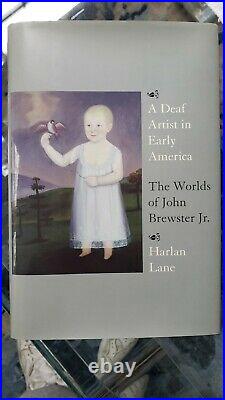 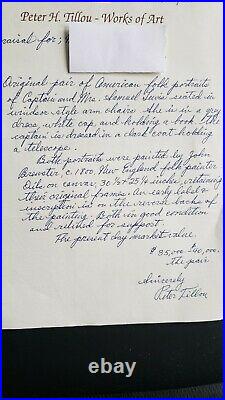 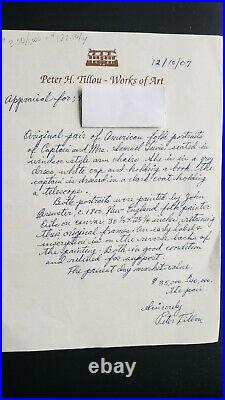 Pair of American Folk Art portraits Circa 1800, John Brewster, Jr. Before the advent of photography around 1850, the only way to capture a likeness was to hire an artist to paint a portrait. Portraits created during this period were almost always of rich or powerful people. In New England at that time, there were no art academies where people could hire trained artists so a number of folk artists emerged to meet the demand for portraits. These artists learned their skills on their own or from neighboring artists, and then traveled from town to town seeking customers who wanted portraits. Was one of the most prominent early American portrait painters. His beautiful portraits have a directness and intensity of vision that were rarely equally. He was also a deaf artist which obviously brought him some very unique challenges. Grew up in Hampton Connecticut. A kindly minister taught him to paint, and by the 1790s he was traveling through Connecticut, Maine, Massachusetts, and eastern New York State, taking advantage of his family connections to offer his services to the wealthy merchant class. Brewster was a prolific, itinerant painter who produced many charming portraits of well-off New England families, especially their children. He lived much of the latter half of his life in Buxton, Maine, USA, recording the faces of much of Maine’s elite society of his time. His first profession paintings were believed to have been painted on July 5, 1795 and his last was painted in 1834. His Deafness may have given Brewster some advantages in portrait painting, according to the Florence Griswold Museum exhibit web page: Unable to hear and speak, Brewster focused his energy and ability to capture minute differences in facial expression. He also greatly emphasized the gaze of his sitters, as eye contact was such a critical part of communication among the Deaf. Scientific studies have proven that since Deaf people rely on visual cues for communication [they] can differentiate subtle differences in facial expressions much better than hearing people. Brewster “created hauntingly beautiful images of American life during the formative period of the nation, ” according to a page at the Fenimore Art Museum website devoted to a 20052006 exhibition of the artist’s work. “Working in a style that emphasized simpler settings [than the “Grand Manner style], along with broad, flat areas of color, and soft, expressive facial features, Brewster achieved a directness and intensity of vision rarely equaled. The Fenimore website also says, His extant portraits show his ability to produce delicate and sensitive likenesses in full-size or miniature, and in oil on canvas or ivory. He was especially successful in capturing childhood innocence in his signature full-length likenesses of young children. Prized by collectors, Brewster is considered one of the big 4 of American Folk art painters that every serious collector strives to obtain. Oil on canvas, frame: 33.75 by 38.5″; view: 26 by 30.75″. Abigail Turner Nabby Tolman Lewis. Birth: 22 Aug 1772 Scituate, Plymouth County, Massachusetts Death: 27 Feb 1843 Burial: Spring Grove Cemetery Cincinnati, Hamilton County, Ohio. Samuel Lewis and the painter John Brewster, Jr. Were cousins; seventh generation descendants of William Brewster the elder of Plymouth Colony. (The couple married 7 September 1794 in Scituate, Plymouth County, Massachusetts; they produced five children). Birth: 10 Jul 1771 Falmouth, Barnstable County, Massachusetts Death: 1 Jan 1842 Cheviot, Hamilton County, Ohio Burial: Spring Grove Cemetery Cincinnati, Hamilton County, Ohio. Samuel was born in Falmouth, Massachusetts, he was a seafaring captain of coasting vessel on the Atlantic Ocean. After heavy losses at sea, he emigrated west in 1813 and settled briefly in Pittsburg (as it was spelled at that time), Pennsylvania. He died from an inflammation of his kidneys in Cheviot, Ohio in 1842 when he was 70 years old. He was buried at the Methodist Burying Grounds in Cincinnati and was later removed to Spring Grove Cemetery on October 27, 1846. He was one of the earliest burials of the cemetery, which had only opened about a month earlier. He is entombed in the Lewis Vault. This painted pair was mentioned in the book A Deaf Artist in Early America, The Worlds of John Brewster Jr. By Harlan Lane in the section called A Brewster inventory at the back of the book. Under Lewis, Captain Samuel, and Lewis Abigail. As you can see by the black light photos there is some professionally done scattered minor restoration, and the portraits were backed on aluminum panels sometime in the 1980s. The pair of John Brewster Jr. Portraits was appraised on 12/10/07 by Peter H. His family still carries on the antique dealer tradition. Despite the ups and downs on the art market in the last several years, prices for John Brewster Jr. Paintings remain among the strongest in the market. The ad from the prominent NYC dealer Wunderlich and company which is pictured was in the spring/summer 1984 version of The Clarion which represented itself as Americas Folk Art Magazine for the museum of American folk art. Please reach out with any questions you might have. The item “John Brewster Jr. Pair of American Folk Art portraits Circa 1800, (Sea Captain)” is in sale since Monday, October 26, 2020. This item is in the category “Art\Paintings”. The seller is “pilotbear” and is located in Sherman, Connecticut. This item can’t be shipped, the buyer must pick up the item.