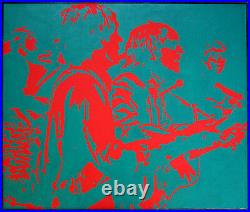 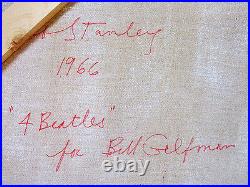 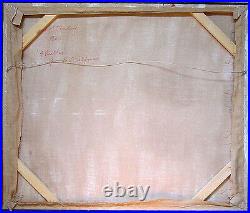 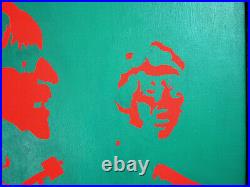 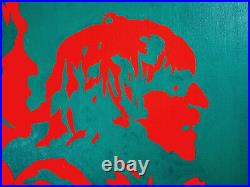 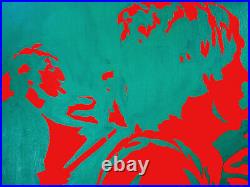 ROBERT STANLEY Signed 1966 Original Acrylic Pop Art Painting “4 Beatles”. This rare original acrylic painting is entitled “4 Beatles” and is signed by the artist on the canvas verso “Bob Stanley”. It is also titled, dated “1966” and inscribed “for Bill Gelfman”. It is in good condition, measures 38″ x 45″ and is framed in its original black wood strip frame (there is wear to the frame). Bob (Robert) Stanley was a painter whose early work was figurative painting about contemporary American life. In the 1960s and early 1970s, he based his paintings on photographs, which he manipulated from black and white or larger than life colored shapes. Stanley was born in Yonkers, New York and studied at the Arts Students League, the Brooklyn Museum Art School on a Max Beckman Scholarship, Columbia University and Oglethorpe University. In the early 1960’s, he began to base his paintings on images clipped from newspapers and magazines, following the example of Pop artists like Andy Warhol and Roy Lichtenstein, who would become his brother-in-law. Enlarged and often rendered in two equally saturated colors (red and green, for example), Mr. Stanley’s images could border on the abstract or be powerfully explicit. His preferred subjects, including rock stars, sporting events and pornography, always seemed to grate against the pretenses of high art. In the late 1960’s Mr. Stanley started using his own photographs, basing paintings on images of tree branches or the ground, and also using pictures of life-drawing models at the School of Visual Arts, where he was a faculty member for 16 years. He had his first solo show at Paul Bianchini in 1965 and thereafter exhibited regularly in New York City and Europe. His work is represented in many public collections, including the Museum of Modern Art, the Metropolitan Museum of Art and the Whitney Museum of American Art in Manhattan; the Fort Worth Museum of Modern Art, the Corcoran Gallery of Art in Washington and the Milwaukee Art Museum. The item “ROBERT STANLEY Signed 1966 Original Acrylic Pop Art Painting 4 Beatles LISTED” is in sale since Monday, November 28, 2011. This item is in the category “Art\Paintings”. The seller is “skf-fineart” and is located in Los Angeles, California. This item can be shipped to North, South, or Latin America, all countries in Europe, all countries in continental Asia.