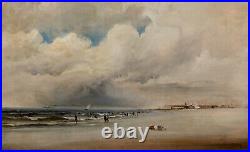 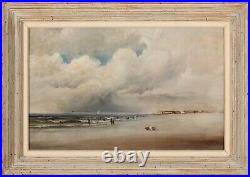 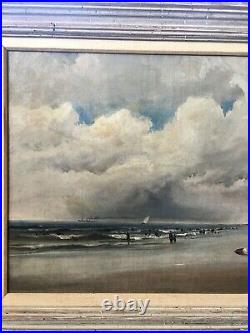 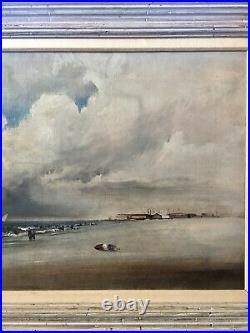 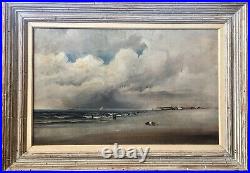 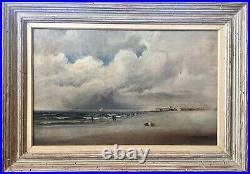 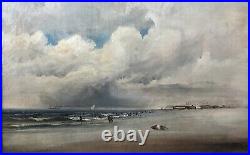 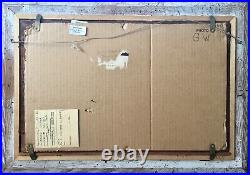 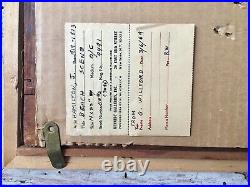 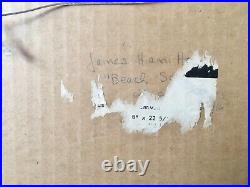 Beach at Atlantic City with Dramatic Sky. Size: 13-3/4 x 21-3/4 inches. Kennedy Galleries, New York (label verso). THE JEAN AND GRAHAM DEVOE WILLIFORD CHARITABLE TRUST. Paint film in very good stable condition. Born near Belfast, Ireland 1819-died San Francisco, CA 1878. For the last twenty years of his career Hamilton painted scenic areas around Philadelphia and was active in Atlantic City, Cape May, and Cumberland County in New Jersey. Located about 65 miles northeast of Philadelphia on New Jerseys south shore, Atlantic City became an immensely popular summer resort after it was developed and made accessible by the Camden and Atlantic Railroad in 1854. Hamilton probably painted this view of Atlantic City in 1868, when he is known to have visited the city in August and September through a number of dated paintings, among them The Sea at Atlantic City Sewell C. Biggs Museum of American Art, Dover, Delaware. [1] It is likely that these paintings were related to On the Beach at Atlantic City (location unknown) that the artist exhibited at the Pennsylvania Academy in 1868. Gerdts, The Sewell C. Biggs Collection of American Art: A Catalogue, vol. 2, Paintings and Sculpture Dover, Del. Biggs Museum of American Art, 2002, p. What is presumably a study for that painting is illustrated in Artists of 19 th Century Philadelphia, Philadelphia Collection, vol. V (Philadelphia: Schwarz Gallery, 1978), pl. Baur, A Romantic Impressionist: James Hamilton, The Brooklyn Museum Bulletin, vol. 12 (spring 1951), p. Biography by Smithsonian American Art Luce Center. James Hamilton began as a businessman before deciding to pursue a career in art. He worked as a drawing teacher in Philadelphia, then traveled to England in 1854 to study the works of Turner and other great landscape painters. Elisha Kent Kane, who had made two expeditions to Arctic waters. In 1875, Hamilton placed all of his artworks for sale in Philadelphia as he prepared for a journey around the world. He got only as far as San Francisco, however, where he died in 1878. Birth place: Entrien, near Belfast, Ireland. Death place: San Francisco. PA, from 1834 (spent his career there except for some travel). Profession: Marine and landscape painter. Studied: a wealthy patron supported his studies at a drawing school in Phila; some study at PAFA. Exhibited: Artists Fund Soc. 1840-45; PAFA, 1847-69, 1876-78, 1880; other galleries in Phila. NYC, Boston, Baltimore & Wash. DC; NAD, 1867; Brooklyn Mus. Work: PAFA; Free Library Phila. BMFA; MMA; Brooklyn Mus. Comments: Hamilton specialized in marine scenes in the Romantic tradition, depicting turbulent storms at sea, shipwrecks, and naval battles; he was a great admirer of Joseph M. In 1834 (age 15) he emigrated with his parents to Phila. Encouraged by John Sartain (see entry) and others, he established himself as a landscape artist, and about 1840 became a teacher of drawing in Phila. Among his students was Thomas Moran. Hamilton was in London 1854-55. After his return to Phila. He was commissioned to illustrate Kanes Arctic Explorations and Fremonts Memoirs. Sources: G&W; Baur, A Romantic Impressionist: James Hamilton, eight repros. Strickland, Dictionary of Irish Artists; Clement and Hutton; CAB; Portfolio (June-July 1952), 218-220, repro. Benjamin, Fifty Years Of American Art, 490, repro. Rasmussen, Artists of the Explorations Overland, 1840-60, 57; Phila. CD 1840-60 and after; 7 Census (1850), Pa. LV, 392; Rutledge, PA; Cowdrey, AA & AAU; Cowdrey, NAD; Swan, BA; Rutledge, MHS; Washington Art Assoc. More recently, see Baigell, Dictionary; Hughes, Artists in California, 232; Muller, Paintings and Drawings at the Shelburne Museum, 73 w/repro. ; 300 Years of American Art, vol. 1, 185; Falk, Exh. Born in Ireland, James Hamilton became a landscape painter and is credited with painting one of the first American seascapes, The Sea at Atlantic City, in 1868. Few of his seascapes have survived, but exhibition records reveal that he did numerous coastal scenes from New York to Maryland. He came to the United States, settling with his family in Philadelphia, at age fifteen. His early teachers are unknown, but he had guidance in book and magazine illustration. He enrolled at the Pennsylvania Academy of the Fine Arts and in addition to painting, gained skill in engraving and etching. He was a great admirer of the landscapes of English painter J. Turner, and became known as the American Turner because of his vivid lighting effects in coastal scenes and seascapes. His only recorded trip abroad was to England in 1854 and 1855, and he studied Turners paintings while there. He also had a studio in Wilmington, Delaware, but mainly he lived in Philadelphia. One of Hamiltons paintings, What Are the Wild Waves Saying, was inspired by a scene from Charles Dickens novel Dombey and Son. Hamilton gave the painting to Dickens, and Dickens, expressing much appreciation, later said it was the only gift he accepted during his American tour. Hamilton also became well known for illustrations of the book Arctic Explorations by Elisha Kent Kane. In 1878, he died in San Francisco, attempting but not completing a trip around the world. The item “James Hamilton American Philadelphia Marine Atlantic City New Jersey Beach PAFA” is in sale since Sunday, February 24, 2019. This item is in the category “Art\Paintings”. The seller is “academicdon” and is located in Jersey City, New Jersey. This item can be shipped to United States, Canada.